In 11 weeks, the world will convene in Copenhagen, under the auspices of the United Nations, to settle a new international agreement on climate change. This will be an ultimate test of global cooperation. Yet the negotiations are proceeding so slowly that a deal is in grave danger. 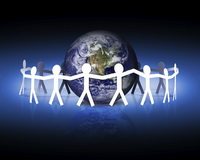 If we miss this opportunity, there will be no second chance sometime in the future, no later way to undo the catastrophic damage to the environment we will cause. So when world leaders gather this week, first at the United Nations in New York and then at the G20 summit in Pittsburgh, it is essential that we move toward resolving the issues that still divide our nations. As scientists spell out the mounting evidence both of the climate change already occurring and of the threat it poses in the future, we cannot allow the negotiations to run out of time simply for lack of attention. Failure would be unforgivable.

Some argue that, amid demanding economic conditions, our resolve to meet environmental commitments should weaken, that the costs are too high. In fact, the opposite is true; a strong agreement in Copenhagen is essential for global economic recovery. For that recovery depends on the investment that an agreement will unleash. The economies that embrace the green revolution earliest will reap the greatest rewards.

Initially, more-efficient consumption of energy will bring greater overall productivity, as resources once directed to meet fuel bills are released for investment. Meanwhile the need for low-carbon energy production and infrastructure, in both the developed world and the rapidly growing emerging economies, will require up to $33 trillion of investment by 2030, according to estimates from the International Energy Agency. By 2015, the global environmental sector could be worth $7 trillion and sustain tens of millions of jobs, Newsweek reports.

In the meantime, world leaders including President Barack Obama are preparing to meet for a United Nations climate change summit on Tuesday in New York about a treaty to replace the Kyoto Protocol. The summit will be key to advancing negotiations -- currently at an impasse over emissions targets and financial resources for developing nations -- ahead of an agreement during the U.N. conference in Copenhagen this December.

"President [Obama] will underscore the importance we attach and the seriousness with which we view the challenge of climate change," U.N. Ambassador Susan Rice said last week. "He will underscore that this is very much a shared challenge, that everybody has to step up if we're going to succeed in making concrete progress."

"This is a series of seminars and speeches and discussions in groups large and small... this is an effort to give political momentum and impetus. It's not a negotiating session," Rice added.

World leaders have been in talks led about a new framework to replace the Kyoto protocol, which expires in 2012. The United Nations is set to hold a two-day conference on Dec. 11 in Copenhagen to secure an agreement, AHN reports.

“This is the time to deliver,” U.S. Senator John Kerry said in an interview. The meetings in New York and Pittsburgh “will lay a lot of the foundation for what is achievable in December,” the Massachusetts Democrat, who heads the Senate Foreign Relations Committee, told reporters.

Without agreement between the two nations that release about 40 percent of greenhouse gases, other countries have less incentive to make commitments by year-end in Copenhagen. China, the biggest emerging economy, and the U.S., the top industrialized power, have become emblematic of discord that has emerged in almost two years of talks between rich and poor countries over what action each side must take, Bloomberg reports.