On Saturday Mohammed Zazi, father of Najibullah Zazi, was arrested for allegedly making false statements to authorities. His son was also arrested and faces the same charges. 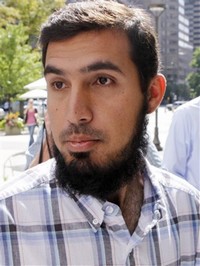 That advice and other recorded conversations were revealed early Sunday when authorities released arrest affidavits that thrust two more men — Afzali and Zazi's father, Mohammed — into the story line of an unfolding multistate terrorism investigation.

Afzali, an imam and funeral-home director, and Mohammed Zazi, 53, of Aurora, are in custody for allegedly making false statements to authorities and could face eight years in prison if convicted.

The affidavits entwine Afzali, identified in the documents as an informant to the New York Police Department in the past, closely with the Zazi family in the week preceding the arrests, Denver Post reports.

It was also reported, the court papers, released after the arrests in Colorado of Najibullah Zazi and his father, as well as that of an imam in Queens, showed that during a search in New York of the younger Mr. Zazi’s rental car on Sept. 11, agents found a laptop computer containing an image of the notes. According to a criminal complaint, the notes “contain formulations and instructions regarding the manufacture and handling of initiating explosives, main explosives charges, explosives detonators and components of a fusing system.”

Court papers also show that in F.B.I. interviews, Mr. Zazi, 24, told agents that during a 2008 trip to Pakistan, he attended courses and received instruction on weapons and explosives at a Qaeda training camp in a tribal area.

The arrests late Saturday indicated the case was rapidly accelerating and provided for the first time — in a sometimes confusing week of events — an explanation of why authorities have focused on the men, even as it shed little light about the alleged plot still under investigation in the United States, Pakistan and elsewhere.

“It is important to note that we have no specific information regarding the timing, location or target of any planned attack,” David Kris, assistant attorney general for national security, said early Sunday.

Veteran counterterrorism officials said they were convinced the plot was potentially serious, based largely on their emerging suspicions about Mr. Zazi, his training in explosives, his travel to Pakistan tribal areas where Al Qaeda is influential and the apparent ease of his movements within the United States, New York Times reports.

Meanwhile, ABC News reported Sunday that federal investigators are looking at the possibility that eight more people might be involved. Four might have ties to Colorado, the other four to New York.

ABC's chief investigative correspondent, Brian Ross, told 7News in Denver the eight could be part of the same cell but operating in two areas.

Federal authorities based Saturday's arrests on alleged false statements made in interviews with the FBI and during "legally authorized electronic surveillance," Denver Post reports.