E.U. and U.N. Urge U.S. to Start Save Environment

More than 100 world leaders, including Mr. Obama and Chinese President Hu Jintao, are scheduled to meet Tuesday at the 64th United Nations General Assembly to talk about fighting climate change, in a prelude to the Pittsburgh Group of 20 meetings starting Thursday. 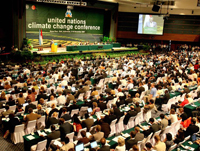 E.U. and U.N. Urge U.S. to Start Save Environment

While the talk will be about the environment, the substance will be about money. Poor nations say that if rich nations want them to stop burning coal or cutting down forests, they should be willing to pay.

U.N. Secretary-General Ban Ki-moon has made global warming a focus, and he is worried that the meeting won't "accelerate progress"  toward a new global climate-change treaty in Copenhagen this December to succeed the Kyoto Protocol.

China has proposed that developed nations contribute 1% of gross domestic product to subsidize efforts by poorer nations to cut carbon-dioxide emissions. That translates to more than $140 billion for the U.S. alone. U.S. climate envoy Todd Stern says the Chinese proposal is "untethered from reality."

Separately, China is trying to establish a voluntary market to encourage companies and individuals to reduce emissions. China Beijing Environment Exchange is scheduled to launch the country's first voluntary carbon standard in New York on Wednesday.

Mr. Obama's administration has begun to act on its own to cut emissions. Last week, the administration rolled out details of its strategy to reduce greenhouse-gas emissions from cars. The head of the Environmental Protection Agency said the proposal paves the way for regulating emissions from other sources, such as power plants.

But a broad proposal to limit U.S. greenhouse-gas emissions is bogged down in the Senate, with Republicans solidly opposed and Democrats divided.  Senate Majority Leader Harry Reidsaid earlier this month that the Senate might delay a vote on climate legislation until next year. A spokesman for Mr. Reid later clarified that the measure could still come to the floor by year end.

Mr. Reid's wavering added to the frustration among countries that had hoped for major progress toward a new global climate deal at the Copenhagen summit.

The officials of the European Union emphasize that improvement of the situation won't be possible until U.S. start acting.

Republicans say whatever deal the Obama administration cuts in Copenhagen will likely be dead on arrival in Washington. The gaps between developed and developing nations' demands, they say, are too wide to be bridged.

Not everyone is gloomy about the prospects for a deal in Copenhagen. Connie Hedegaard, Denmark's climate and energy minister, says she sees hope in the fact that Japan's new prime minister, Yukio Hatoyama, recently pledged that his country will seek to reduce its greenhouse gas emissions by 25% from 1990 levels by 2020 -- a much bigger cut than the 8% goal set by former Prime Minister Taro Aso.

Still, big differences remain between the U.S. and Europe on fundamental issues, including how quickly rich countries should have to cut their emissions over the next decade or so. While the European Union has pledged to cut its emissions by at least 20% below 1990 levels by 2020 -- and to increase that reduction to 30% if other major emitters do the same -- the most aggressive proposal in Congress to curb U.S. emissions calls for a 4% reduction beneath 1990 levels by 2020. The Wall Street Journal assisted to the report