Space Shuttle Headed for Florida after Stay at Barksdale

The space shuttle Discovery is stopped for the night at Barksdale Air Force Base in Shreveport, La., as part of its cross-country flight to Florida. 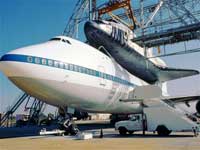 Space Shuttle Headed for Florida after Stay at Barksdale

The shuttle is being ferried atop a modified 747 aircraft, known as a Shuttle Carrier Aircraft. Discovery landed from space Sept. 11 in California.

A refueling stop was made earlier Sunday at the international airport in Amarillo, Texas, and the shuttle was greeted by dozens of well-wishers and space enthusiasts.

The shuttle should reach Kennedy Space Center in Florida on Monday, The Associated Press reports.

The craft, ferried on a Boeing 747, is scheduled to take off between 9-10 a.m. bound for Kennedy Space Center in Florida. It arrived for its second stay at Barksdale on Sunday after flying over the Dallas-Fort Worth Metroplex then Bossier City and the Haughton area.

Dozens lined fences at the base to view the landing, while others perched on rooftop parking garages and other vantage points.

Lisa Garvey, a self-described "space nerd," joined some 10 other enthusiasts in Bossier City, just north of Barksdale near Southern RV Supercenter on Industrial Drive. The space program's disasters — the 1986 Challenger and the 2003 Columbia explosions — make people want to see safe returns, she said.

"There are six flights left. This one has two of them," NASA ferry operations manager Don McCormack said about Discovery. "There's a lot of talk about where the agency goes from here," reports Shreveport Times.

Discovery could return to the area as early as 10:30 a.m.

The 2,500-mile ferry flight began Sunday with a sunrise take-off into a red sky over Edwards Air Force Base in California's Mojave Desert. The shuttle landed there nine days earlier because of stormy weather in Florida.

About 150 KSC employees helped prepare the shuttle for flight.

Still holding the heavy cargo module it hauled up to the International Space Station during a 14-day mission, Discovery weighed more than 224,000 pounds atop the modified 747, Florida Today informs.