Thursday President Hamid Karzai urged foreign allies not to interfere in probes over irregularities that could slash his clear lead. 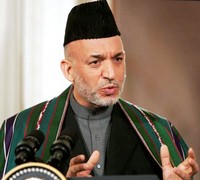 Afghans went to the polls last month to elect a president for only the second time in history with a Taliban insurgency at its deadliest since the 2001 US-led invasion replaced the Islamist regime with Western-backed rule.

The Independent Election Commission (IEC), which has been accused of bias towards Karzai, has released results in an agonisingly slow process alongside mounting claims of massive vote-rigging in favour of the president.

On Wednesday, the final preliminary vote put Karzai on track to be reelected with 54.6 percent but recounts at more than 2,500 polling stations could yet tip the balance and force him into a run-off with his rival Abdullah Abdullah.

Addressing reporters publicly for the first time since the eve of the August 20 poll, Karzai played down allegations of fraud and said he would respect investigations by the IEC and UN-backed Electoral Complaints Commission.

"Media has reported major fraud. It wasn't that big. If there was fraud, it was small -- it happens all over the world," Karzai told a news conference at his heavily fortified palace in the Afghan capital, AFP reports.

It was also reported, Afghan president has rebutted claims of widespread fraud in the disputed presidential election and insisted that the process remains credible.

Karzai said he was "surprised and rather shocked" by the findings of an EU observer mission that one quarter of the vote may have been rigged.

With his nearest rival, Abdullah Abdullah, commanding just 27.7% of votes, Karzai looks on course to win. But if a recount of 10% of disputed votes erodes his lead below 50%, a second round of voting will be necessary.

Afghan election officials have started making preparations for a possible second round of voting A senior western official said that the Afghan independent election commission had pencilled in a run-off vote for the third week of October, confounding earlier predictions that a fresh poll was impossible before the onset of the harsh Afghan winter, guardian.co.uk reports.

Meanwhile, Abdullah has repeatedly accused the government-appointed election commission — which organized the vote and is separate from the U.N.-backed complaints body — of "state-engineered fraud" to steal the election.

He spoke out again Thursday. He said such a tainted poll would establish "illegitimate rule" and further destabilize a country already struggling to fight a resurgent Taliban militia.

"Illegitimate rule can only help the insurgency to strengthen," Abdullah told reporters at his house shortly after Karzai's press conference.

But staging a run-off election could bring its own complications. Election day Aug. 20 was marred by Taliban threats that dampened turnout and militant attacks in which dozens of people died, raising fears another vote could bring more violence.

Also, many worry that delays for fraud investigations and recounts could push any runoff into the spring, creating a power vacuum in the meantime. It is not feasible to organize a nationwide vote during winter. Snows that start in November make many roads impassable for months in this mountainous country.

Some international monitors have suggested that the solution may be a power-sharing government, but both Karzai and Abdullah ruled that out Thursday. Karzai said, however, that he would welcome Abdullah — who previously served as foreign minister under Karzai — into his administration, The Associated Press reports.