“Here I am free and my country is still captured,” said Zaidi during a press conference at the television station where he had worked. 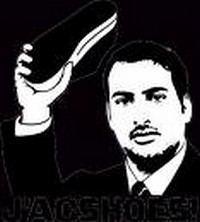 He claimed that he was beaten with pipes, steel cables and electric shocks while in custody. He added that he believed there were many who would like to see him dead, including unnamed American intelligence agencies.

Mr. Zaidi did not take questions following his brief remarks, but family members said he would travel to Greece, where he would receive medical and psychological care.

“He is going to flee,” said his brother, Uday Zaidi. Part of the reason he fears for his life, his brother said, is that he plans on releasing the names of people who played a role in his being tortured while in custody, including what he said were high ranking security officials.

Ali al-Mosawi, an advisor to Prime Minister al-Maliki, said that the accusations should be viewed skeptically since Mr. Zaidi had just been released from prison. He did not address the specific charges, the New York Times reports.

It was also reported, Muntazer al-Zaidi's supporters and family gave him a rapturous welcome, sacrificing six sheep to mark his release and hanging laurels of flowers around his neck.

Wearing an Iraqi flag, Zaidi gave a detailed account of being tortured after his arrest, and vowed to reveal the names of senior officials in the Iraqi government and army who he said had been involved in his mistreatment.

Appearing with a missing front tooth, he told of beatings, whippings and electric shocks after his arrest. He said he now feared for his life, and believed US intelligence agents would chase after him.

"These fearful services, the US intelligence services and its affiliated services, will spare no efforts to track me as an insurgent revolutionary ... in a bid to kill me," he told the news conference.

"And here I want to warn all my relatives and people close to me that these services will use all means to trap and try to kill and liquidate me either physically, socially or professionally."

The reporter said he was abused immediately after his arrest, and the next day.

"In the morning, I was left in the cold weather after they splashed me with water," he said.

He went on to defend his assault on Bush. "Simply put, what incited me toward confrontation is the oppression that fell upon my people and how the occupation wanted to humiliate my homeland by placing it under its boots," he said, Guardian.co.uk reports.

In the meantime, at a December 14 news conference when al-Zaidi threw both his shoes at Bush and called him a "dog" -- two of the worst insults in the Middle Eatt. Bush ducked the shoes and was not hurt.

During his remarks, al-Zaidi offered one apology: to fellow journalists who perceived his act as unprofessionalism.

"Professionalism does not preclude nationalism," he said.

Al-Zaidi was sentenced to jail for "assaulting a foreign head of state on an official visit to Iraq."

His original three-year sentence was reduced to a single year by an appellate court in April.

The journalist's family and supporters had waited for two days outside the Baghdad jail where he was held, initially hoping he would be freed on Monday, but procedural delays kept that from happening, CNN reports.