Famous Shoe Thrower Is Out Of Prison

An Iraqi reporter who threw his shoes at  George Bush was released from prison Tuesday. 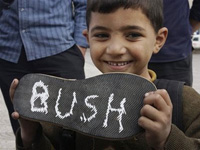 Famous Shoe Thrower Is Out Of Prison

Muntazer al-Zaidi, whose act during a news conference last December reflected the mood of many Iraqis toward the former U.S. leader, was met outside the jail by parliamentarians who support his case, brother Uday al-Zaidi said.

"He left the jail a few minutes ago and now he's on his way to Baghdadiya TV," Uday said referring to the television channel where his brother worked.

Zaidi was sentenced to three years in jail for assaulting a visiting head of state, but his sentence was later reduced to one year.

An Iraqi court ordered Zaidi's release Monday because under Iraqi law all prisoners sentenced to one year without previous convictions and who show good behavior automatically get out after serving three quarters of it.

Millions of people across the world saw online or TV footage of Zaidi throwing his shoes at Bush and calling him a "dog," both insults in the Middle East. It caused huge embarrassment to Bush and Iraqi Prime Minister Nuri al-Maliki, who was stood beside him during the conference.

But many viewers, including in the United States, applauded his bravery. Venezuela's anti-American President Hugo Chavez called him courageous. Fathers from other Arab nations have offered Muntazer their daughters as brides, according to Washington Post' report.