The Greens Made Rough Mistake In Thailand

U.S. filmmaking couple commited a crime, which might cost their lives. 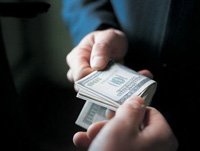 The Greens Made Rough Mistake In Thailand

The Hollywood producers have been convicted in Los Angeles of bribing Thai officials so they could run the Bangkok International Film Festival and land other projects.

Jurors found Gerald and Patricia Green guilty of conspiracy and money laundering. They each could receive up to life in prison.

Federal prosecutors say the Greens paid the former governor of the Tourism Authority of Thailand about $1.8 million by transferring money into bank accounts of the official's daughter and friend. In exchange, the couple ran the film festival and received other tourism-related deals that netted them about $13.5 million.

Gerald Green's producing credits include "Salvador," and "Rescue Dawn." His wife worked with her husband on lesser-known films.

The jury returned the verdict late Friday, according to The Associated Press' report.