The bison population in Yellowstone National Park U.S. continues to bounce back from a massive culling of the herd two winters ago. It's now estimated at 3,300 animals. 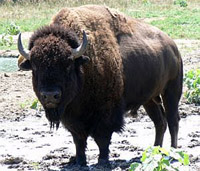 More than 1,600 Yellowstone bison were killed in 2008 as they attempted to migrate to lower elevations in Montana in search of food.

State and federal agencies employ a capture and slaughter program against bison leaving the park to protect against the spread of the disease brucellosis.

Symptoms include profuse sweating and joint and muscle pain. Brucellosis has been recognized in animals including humans since the 19th century.

The disease can cause pregnant animals including cattle to miscarry, Fox News reports.