The oldest person in the world, Gertrude Baines, died at 115, presumably, from a heart attack. Baines was born on April 6, 1894. 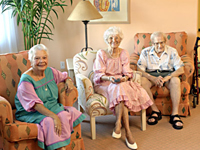 Sakhan Dosova, previously thought to be the oldest woman in the world, died at 130 earlier this year when she slipped on the bathroom floor of her apartment in Kazakhstan.

The United States currently has the greatest number of centenarians in the world, estimated at 96,548 on November 1, 2008. The U.S. number is partly a function of America's large population in 1890-1910, large farm population a century ago, and an increased emphasis on long-term care facilities.

Japan is second, with 36,276 in September 2008. Many experts attribute this (and Japan's very high life expectancy) to the Japanese diet, which is particularly low in fats and to hygienic practices. In addition, five times the rate of Okinawans live to be 100 than the rest of Japan.

France has the highest rate of centenarians in percentage of the total population: 20,115 centenarians in metropolitan France for a little less than 62 millions inhabitants, or 1 centenarian for 3,076 people. The rate is 1 per 3,522 in Japan (but much higher in Okinawa), and 1 per 3,300 in the United States.

Despite misconceptions to the contrary, human lifespans have remained relatively constant for the past 2,000 years, according to LiveScience's report.