Nation and FBI Being Vigilant

This year  marks eight years since the horrific attacks of 9/11. Most law enforcement officials assure that the country's security has improved after the attacks. Al Qaeda has been degraded and many of its leaders have been killed. 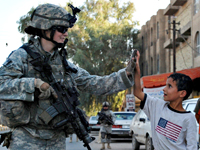 Nation and FBI Being Vigilant

But on matters of terrorism, there is always a caveat. U.S. pressure has forced al Qaeda into a more decentralized organization in which its major leaders, such as Osama bin Laden and Ayman Zawahiri, probably are not directing specific attacks.

Still, the group retains enough people and infrastructure to remain "lethal," officials said. And U.S. intelligence officials also worry about groups and individuals around the world who are inspired by al Qaeda, even if they don't report directly to its leadership.

There are indications this worry may be very well-founded.

The FBI reports that a number of recent investigations have uncovered evidence that shows young Americans been traveling overseas and being indoctrinated by Islamic radicals.

Claims as to the location of Osama bin Laden have been made since December 2001, although none have been definitively proven and some have placed Osama in different locations during overlapping time periods.

In March 2009, the New York Daily News reported that the hunt for bin Laden had centered in the Chitral district of Pakistan, including the Kalam Valley. According to the report, author Rohan Gunaratna states that captured Al Qaeda leaders have confirmed that Chitral is where bin Laden is hiding,  ABCnews reports.