Bloom to Ginger Up U.S. Industries 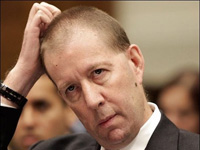 Bloom to Ginger Up U.S. Industries

Bloom, a former United Steelworkers union adviser and Lazard Ltd. investment banker, helped guide General Motors Co. and Chrysler Group LLC through bankruptcy as part of the government’s rescue of the auto industry. In his new role, he will plan Obama’s agenda to “revitalize” manufacturing jobs, according to a statement from the White House Press Secretary.

“Ron has the knowledge and experience necessary to lead the way in creating the good-paying manufacturing jobs of the future,” Obama said in a statement yesterday. “We must do more to harness the power of American ingenuity and productivity so that we can put people back to work and unleash our full economic potential.”

Bloom will also keep his role with the automotive industry task force. Bloom will travel with Obama today to Cincinnati where the president is scheduled to make remarks on health care and the economy.

The move may alleviate criticism from Democratic allies that the administration spent billions of dollars to prop up investment banks and did little to aid average Americans.

About 570,000 Americans filed jobless-benefit claims in the week ended Aug. 29, more than the 564,000 median forecast of economists surveyed by Bloomberg News, according to figures from the Labor Department. The statistics indicate companies remain focused on cutting expenses as the economy emerges from its worst recession since the 1930s. The White House expects the unemployment rate overall to rise above 10 percent.

Creating the manufacturing post may help ease concern that Obama’s economic policies haven’t been effective enough. He signed a $787 billion stimulus measure in February, promising that the law would save or create 3.5 million jobs over two years.

As the chief policy maker on manufacturing, Bloom will be charged with reviewing U.S. competitiveness in the global economy. His job will include coordinating with the Commerce, Treasury, Energy and Labor departments, integrating current programs with new initiatives, The Bloomberg reports.