U.S. Secretary of State Hillary Clinton met Thursday with Somalia's new president, whose government is waging a bloody battle against an Islamic insurgency -- with some help from the United States. 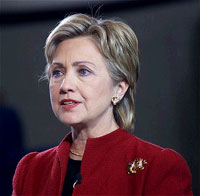 "The United States and the international community must serve as an active partner in helping the TFG [transitional federal government] and the people of Somalia confront and ultimately move beyond the conflict and poverty that have gripped their country," she said at a joint news conference with Ahmed at the U.S. Embassy in Nairobi, Kenya, CNN reports.

Accusing the extremists of trying to turn Somalia into a base to launch worldwide terrorist attacks, Clinton said the Obama administration would boost military supplies and other aid to the government and an African peacekeeping force supporting it. She did not detail the new aid.

"They see Somalia as a future haven for global terrorism," she said of the extremist Somali militia known as al-Shabab. To make her point, she noted the recent arrests of four men allegedly linked to the group who are suspected of plotting attacks there in Australia.

"Our information is that al-Shabab not only uses foreign fighters and foreign money but foreign ideas in its attack on the people of Somalia," she said, The Associated Press reports.

Meanwhile, David Shinn, adjunct professor at the Elliot School of International Affairs at George Washington University and a former ambassador to Ethiopia reacting the meeting said it is significant.

"It's the highest level meeting that any American official has ever given to President Ahmed. So that's important. It clearly underscores the interest that the United States has in reaching some sort of satisfactory resolution to the conflict in Somalia," he says.

He says the amount of US moral and material support for the TFG "is greater than on any previous occasion in recent years," Voice of America reports.