US Journalists Released Thanks to Clinton 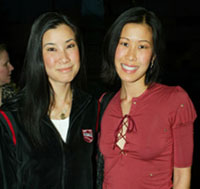 US Journalists Released Thanks to Clinton

Since the March capture of Laura Ling, 32, and Euna Lee, 36, there was reason to believe their freedom could be secured. North Korea's 62-year existence has consisted of periodic tantrums designed to elicit food or other aid for the impoverished country. Given that, Lee and Ling might be released for the right price.

Turns out North Korea settled for a photo op with a former U.S. president, which it will use to its advantage in propaganda. Clinton came with the backing of the Obama administration, but was not its official representative and made no proffer on its behalf.

North Korea 's reclusive and ailing dictator, Kim Jong Il, came out of hiding to have a meal and get his picture taken with Clinton. Although the North Korean press said Clinton apologized for Lee and Ling's alleged transgression, Secretary of State Hillary Rodham Clinton later denied that was the case. The journalists were released as a humanitarian gesture, The Philadelphia Inquirer reports.

"We knew instantly in our hearts that the nightmare of our lives was finally coming to an end, and now we stand here, home and free," Ling said during an emotional airport reunion with her family and that of Lee's.

Both reporters sobbed and embraced their husbands and Lee's 4-year-old daughter, Hana, as they were reunited with them Wednesday in a hangar at Bob Hope Airport in Burbank following a 9 1/2-hour flight from Japan. It was their last stop following their release Tuesday from North Korea, The Associated Press reports.

He added, "this is a very bad signal," because it encourages the North Korean regime's "very bad behaviour," The National Post reports.