New NATO Secretary General Anders Fogh Rasmussen paid a visit to Afghanistan on Wednesday for meetings with military and political leaders and troops on the ground just days after taking over the alliance's top post. 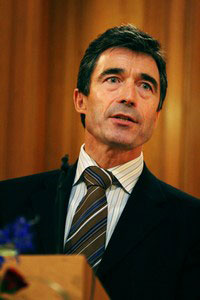 "This news conference and this visit comes just 48 hours into his new job, and he said that was very significant ... and that he saw Afghanistan as his very top priority," Bays said, Aljazeera.net reports.

"We have to realize that there is no military solution solely to the situation in Afghanistan and we need a broader perspective and comprehensive approach," NATO's top man told a joint press conference with President Hamid Karzai.

He further stressed that military efforts, hand in hand with a strong commitment from the international community to reconstruction in Afghanistan, is essential for having solution.

Meanwhile, NATO's chief said that peace talks would be held with "those who lay down their arms."

Author`s name: Editorial Team
13:28
Azovstal falls: 265 Ukrainian fighters leave steel plant and surrender
13:06
Moscow says Finland and Sweden's entry into NATO will 'untie' Russia's hands
12:53
Kremlin declared the United States hostile to Russia
21:11
Ukraine blows up ammonium nitrate to accuse Russia of chemical attack
17:46
Ukraine can skip Membership Action Plan on its way to NATO
17:34
Azovstal militants reveal how many days they can hold out
16:47
Russia and Ukraine reach agreement to evacuate wounded from Azovstal
16:12
Expert says why Kyiv was interested in nuclear weapon before Russian operation started
15:33
Putin at CSTO summit: Russia does not have any issues with Sweden or Finland
14:47
Renault Russia to start producing Moskvich cars
World
Chechnya thanks the West for the weapons supplied to Ukraine