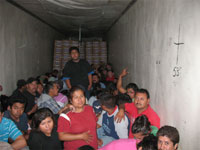 None of the people found inside the trailer Wednesday night was sick or hurt, but officers said it easily could have ended in disaster. There were several unsecured pallets of mangoes in the trailer with a group that included 14 minors between the ages of 12 and 17, and two pregnant women, The Arizona Daily Star reports

"These people were treated like cargo. They were crammed inside this truck and subjected to near freezing temperatures," said Matthew Allen, the special agent in charge of Immigration and Customs Enforcement agency investigations in Arizona.

"Fortunately, due to the swift action of the law enforcement agencies involved in this case, none of these people came to any harm," he added, Reuters reports.

The undocumented immigrants will be sent back to their home countries, officials said.

Authorities said the driver of the trailer — Luis Antonio Mendoza, 26, of Fresno, Calif. — was arrested and charged Thursday with conspiracy to transport illegal immigrants for profit, The Associated Press reports.