India 's prime minister is going to continue improving ties with Pakistan, defending his move towards resuming a stalled peace dialogue with its long-time rival. 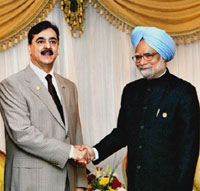 "I sincerely believe it is our obligation to keep the channels of communication open," Manmohan Singh said in an address to the Indian parliament on Wednesday, Aljazeera.net reports.

"I believe there's a large constituency for peace in both countries," he added. "I believe it's as much Pakistan's interest as it is ours."

But he also said India must protect itself by bolstering its maritime, anti-terrorism and policing capabilities. He urged Pakistan to bring those behind the November terrorist attacks in the Indian financial hub of Mumbai to justice and to do everything possible to prevent it from happening again, warning that relations would not weather another such crisis, The Los Angeles Times reports.

Meanwhile Salman Haider, an analyst and former Indian foreign secretary, said Singh may want to reach an accommodation with Pakistan in order to bolster his own legacy. Haider said Singh had not been in a position to do so prior to the last elections that enhanced his standing, along with the recent U.S.-India nuclear agreement.

Manoj Joshi, a commentary editor with the Mail Today newspaper, said Singh is asking Indians to trust there will be no further terrorist attacks linked to Pakistan.

"He's put out his own political capital on this," he said, United Press International reports.