The National Weather Service initially said the high for Wednesday would be 99 degrees, but early today upgraded that forecast to say it would reach 100 degrees. Today was forecast for a high of 95. 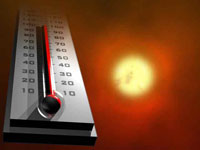 The University of Washington, however, is forecasting triple-digit temperatures using a forecasting program called Probcast, which predicts a high Wednesday of a whopping 102 degrees.

"We're really getting a dose of what life is like in the desert Southwest all summer long," said Andy Bryant, a forecaster for the National Weather Service in Portland. "An extreme ridge of high pressure is making it hotter in the Willamette Valley than it is in eastern Oregon."

Tuesday's high temperature hit 106 degrees at 6 p.m. at Portland International Airport, shattering the old record of 101 degrees in 1998. "It was a slam dunk," said forecaster Wanda Likens of breaking the record Tuesday, as temperatures soared nearly 10 degrees from noon to 6 p.m. By 2 p.m. Tuesday, it was 100 degrees at the airport, informs The Oregonian.

In Washougal, Wash., the fire department opened up an air-conditioned training room to help cool folks off, and set up a shower in a city park during the afternoon.

Relief was in sight, however, as temperatures were expected to begin dropping into the 90s by Thursday in areas where the high has been over 100, said Miles Higa, a weather service meteorologist in Portland.

In eastern Washington, temperatures around Spokane are forecast in the 90s for the rest of the week, which is a little above normal. More worrisome is a forecast for thunderstorms that could produce lightning that ignites wildfires, The Associated Press reports.