According to CNN one of Osama bin Laden's sons was believed killed in Pakistan earlier this year. 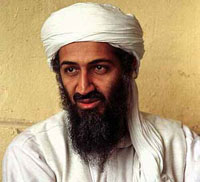 Citing a U.S. counterterrorism official, the CNN said that Saad bin Laden was probably killed in a missile strike by a U.S. predator drone.

"We believe he is dead, although in all of these instances, unless you have DNA or other hard evidence, you don't know for sure," the official told the CNN, Xinhua reports.

The official told National Public Radio agents were "80 to 85%" sure Saad Bin Laden was dead, but added that without a body it was hard to be certain.

The son was not deliberately targeted and happened to be "in the wrong place at the wrong time", the official said.

Saad Bin Laden was active in al-Qaeda but not a major player, he added, BBC News reports.

It was unknown whether Sa'ad was anywhere near his father when he died, NPR said. A U.S. intelligence official said in January that Sa'ad had been freed from custody in Iran and had probably gone to Pakistan.

"There have been reports (of his death), but none of them has been confirmed or verified," a senior Pakistani security official told Reuters.

The United States believes Osama bin Laden is hiding in Pakistan. Intelligence agencies have had near misses tracking his deputy Ayman al Zawahri in Pakistan, but the hunt for bin Laden went cold several years ago.

While al Qaeda often releases audiotaped messages from bin Laden, the last videotape was released was two years ago, and there is constant speculation that he might have died, Reuters reports.