Reporting from Beirut - Iran's main opposition figure announced today that he would create a political organization to bolster the protest movement stemming from the disputed reelection of President Mahmoud Ahmadinejad. 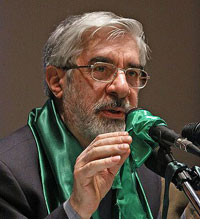 In his most extensive remarks in weeks, Mir-Hossein Mousavi, whose loss to Ahmadinejad was blamed by many Iranians on vote fraud, said his political group would at first be made up of "influential figures" who would "lay the groundwork for a large-scale social movement," The Los Angeles Times reports.

Many supporters of Mir Hossein Mousavi had feared the announcement would amount to a disavowal of the civil disobedience campaign that has sprung up since the June election in which the government has been accused of massive vote fraud.

Instead, Mousavi explicitly praised the protest movement as a cornerstone for change in Iran, The Chicago Tribune reports.

In his most extensive remarks in weeks, Mousavi said that "power is always inclined to become absolute, and only people's movements can put a hold on this inclination." Several other opposition figures, emboldened by high-ranking clerics and unbowed by the severe government crackdown on protesters, have also issued challenges to the authority of supreme leader Ayatollah Ali Khamenei and his ally Ahmadinejad, The Los Angeles Times reports.