Iraqi Prime Minister Nuri al-Maliki is to visit Barack Obama in the White House on Wednesday, as the US leader pushes for stronger reconciliation efforts in the conflict-wracked country. 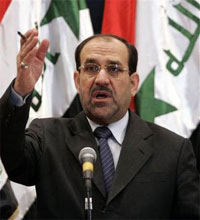 It will be the first meeting between Maliki and Obama since US troops withdrew from Iraqi cities at the end of June, a milestone in Iraq's rehabilitation after the 2003 US-led invasion, AFP reports.

The talks will also cover the role of US troops as they prepare for a complete departure from Iraq by the end of 2011, BBC News reports.

"The visit will highlight the non-security ties and lay the groundwork for future economic cooperation and trade," one official said, speaking on condition of anonymity.

Maliki's Shi'ite Muslim-led government is aggressively courting foreign investors as it struggles to resurrect an economy calcified by decades of sanctions, neglect and war.

During his trip to the United States this week, Maliki will tout Iraq's improved security after six years of conflict that saw tens of thousands of people killed in insurgent and sectarian violence and millions more forced from their homes.

The Obama administration remains concerned about the pace of political reconciliation in Iraq but, unlike the Bush administration, there are no plans to set political benchmarks for Maliki's government to meet.

"We are not going to be dictating to the Iraqis what they need to do," the U.S. official said. "The main focus will be to stress the importance of a comprehensive long-term partnership that goes beyond security."

The official said he did not know whether Obama planned to raise the issue of political reconciliation at his White House meeting with Maliki.

Both Obama and his vice president, Joe Biden, have used trips to Iraq this year to call on Iraq's government to reach a political accommodation with opponents on disputes ranging from sharing oil revenues to resolving internal boundary issues, Reuters reports.