Sri Lanka to Have $2.5 billion Loan

Sri Lanka 's share market hit a one-month high early Tuesday, on hopes for an economic revival, a fall in interest rates, and a boost in foreign investments after the country reached a loan agreement with the International Monetary Fund (IMF). 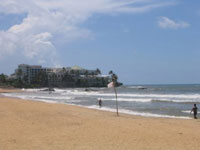 Sri Lanka to Have .5 billion Loan

The IMF and Sri Lanka on Monday reached a $2.5 billion loan deal to help the country cope with a global financial crisis and pay for reconstruction after a 25-year war, Forbes reports.

“This opens huge opportunities for Sri Lanka,” central bank Governor Nivard Cabraal said in a telephone interview in Colombo today. “It will also make borrowing costs cheaper and is likely to have a very significant impact on our ratings,” Bloomberg reports.

Meanwhile the IMF said that "The government has formulated an ambitious program aimed at restoring fiscal and external viability and addressing the significant reconstruction needs of the conflict-affected areas."

The country has relied on borrowing from international markets to fund its large budget deficit, but the government was forced to tap its foreign exchange reserves as global credit markets dried up.

Rebuilding the country will require significant spending, the IMF said, adding that the program will provide a framework for donors to help fund reconstruction.

"The IMF staff supports this program, specifically the government's goals of rebuilding reserves, reducing the fiscal deficit to a sustainable level, and strengthening the financial sector," the IMF added, Reuters reports.