Two Bosnian Serb commanders have been found guilty of war crimes, including burning women and children alive, during the Bosnian civil war. 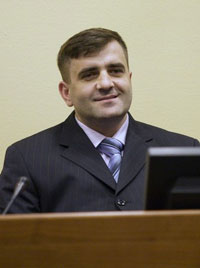 Cousins Milan and Sredoje Lukic were members of a paramilitary group called the White Eagles, or the Avengers.

They were accused of murder, persecution, extermination and other inhumane acts against Bosnian Muslims near Visegrad between 1992 and 1994, BBC News reports.

Milan Lukic, 41, who prosecutors said led a Serb paramilitary group known as the "White Eagles" or "Avengers," was sentenced by the tribunal in The Hague to life in prison for killing at least 119 Bosnians in two incidents in June 1992.

Sredoje Lukic, 48, who prosecutors said was also a member of the unit, was given 30 years imprisonment. The court ruled it had not been proved that he was present at one of the attacks.

Both men had pleaded not guilty to all charges and said they were not present in the eastern Bosnian town of Visegrad at the time of the crimes. Defense lawyers had requested acquittals, Reuters reports.

The court found Milan Lukic responsible for the murder of 59 Muslim women, children and elderly men in a house in the town of Visegrad.

Milan Lukic was found to have placed the explosive device into the room, which set the house ablaze. Milan Lukic shot at people trying to escape from the burning house.

Sredoje Lukic "knew what would happen to the victims that he helped herd" into the home, the court wrote in its judgment.

Milan Lukic was also found guilty of the murder of at least 60 Muslim civilians in another house in Visegrad later that same month. The court found that he and others "forced the civilians inside the house, blocked all exits and threw in several explosive devices and petrol, setting the house on fire," CNN reports.