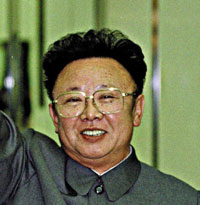 The report cited unnamed South Korean and Chinese intelligence officials. Representatives from the two countries are meeting now in Seoul to discuss how to deal with a North Korea that has become increasingly belligerent in recent months.

However, South Korean officials declined to officially confirm the report, and US officials had no comment, according to Reuters, The Christian Science Monitor reports.

In the meantime the network quoting medical sources in  said Kim may not live more than five years, given the high mortality rate for such a cancer and his advanced age.

Kim's health is one of the most closely-guarded secrets in the reclusive communist state, Aljazeera.net reports.

Meanwhile a Russian expert on North Korea said Monday that Media reports that North Korean leader Kim Jong-il is seriously ill and will soon cede power to his son should be treated with caution.

"I would not jump to any conclusions. We have heard similar reports many times in the past. I think they should be treated with caution," Alexander Vorontsov, head of the Korea and Mongolia department at the Institute for Oriental Studies, said in an exclusive interview with RIA Novosti.

"Despite rare appearances, the North Korean leader is moving around the country more frequently this year than last year. He is in constant contact with people," the analyst said.

"I believe, both South Korean and Japanese media are simply looking for a sensation. They have buried Kim Jong-il many times, but he has 'risen from the dead' time and time again," RIA Novosti reports.