Japan to Hold Elections on Aug. 30 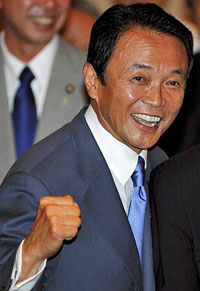 Japan to Hold Elections on Aug. 30

But analysts said the move by Aso's government likely won't prevent a big defeat for the ruling Liberal Democratic Party that would in all probability cause it to cede power to the Democratic Party of Japan, ending more than half a century of nearly uninterrupted LDP rule, The Wall Street Journal reports.

In a meeting with top party officials, Mr. Aso said he would dissolve Parliament next week and hold the elections for its lower house, which selects the prime minister, on Aug. 30. The sudden decision follows months in which Mr. Aso had been trying to put off the national elections, which opinion polls show his Liberal Democrats are almost certain to lose, The New York Times reports.

A new coalition government, like the LDP, would stress the need to revive the recession-hit economy over repairing Japan's tattered public finances and would be unlikely to make sharp shifts in policies, Reuters reports.