Alaska Gov. Sarah Palin announced on Friday that she would resign. 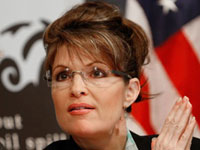 Palin, 45, the 2008 Republican vice presidential candidate who has an ardent following among conservatives, had been expected to announce Friday that she would not seek re-election after her term ends in 2010. But, surrounded by her family, she blindsided even Alaska political veterans when she announced in a meandering statement that she will step down July 25 and turn over the reins to Lt. Gov. Sean Parnell, The San Francisco Chronicle reports.

Palin offered few clues about her ambitions but said she arrived at her decision in part to protect her family, which has faced withering criticism and occasional mockery, and to escape ethics probes that have drained her family's finances and hampered her ability to govern. She said leaving office is in the best interest of the state and will allow her to more effectively advocate for issues of importance to her, including energy independence and national security.

"I love my job and I love Alaska, and it hurts to make this choice, but I'm doing what's best for them," Palin said, the sun glinting off a seaplane on Lake Lucille behind her, The Washington Post reports.

“She’s so unpredictable,” said Larry Persily, a former aide in her Washington office reacting this event.

Although her resignation was particularly unpredictable, Alaska has grown accustomed to having a governor inclined to surprise — and who brought an unprecedented spotlight to the state and its politics.

Ms. Palin, in describing her own political behavior, has proudly used the word “maverick” in the past.

Now, while the attention on her is not likely to diminish soon, the attention on the Alaska governor’s office almost certainly will. Her successor, Lt. Gov. Sean Parnell, is said to be as steady as Ms. Palin has been surprising, state political leaders say, The New York Times reports.