Swine Flu Spreads in the UK

There are now so many cases of swine flu in the UK that the outbreak cannot be contained, The government has admitted. 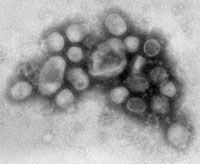 Swine Flu Spreads in the UK

Ministers said the emergency response would now move to a new "treatment" phase across the UK as there may soon be 100,000 new cases a day, BBC News reports.

"We could see over 100,000 cases per day by the end of August - though I stress this is only a projection," health minister Andy Burnham told parliament.

He said the number of confirmed cases of the virus known as swine flu is doubling every week, putting pressure on health services.

"We have always known it would be impossible to contain the virus indefinitely and that at some point we would have to move away from containment to treating the increasing numbers falling ill," he said.

The World Health Organization declared on June 11 that the outbreak of the virus was a pandemic. More than 77,000 people have been infected worldwide, Reuters reports.

A month ago, Britain's Health Secretary Andy Burnham issued a statement urging British citizens not to panic despite a surge in cases of H1N1 influenza virus in the country. Now it seems health officials have the opposite problem, and are urging parents not to hold "swine flu parties" which some people believe will build up children's immunity by infecting them with the virus.

Parents in Britain have long held "chicken pox parties" at the beginning of summer so that children can catch the disease at a convenient time. But recent chatter on various internet sites has health officials worried that parents are planning similar events for swine flu in order to make their children immune to the virus should it mutate into a more lethal form. In a statement on Tuesday, Sir Liam Donaldson, Britain's Chief Medical Officer, said such parties were the result of "seriously flawed thinking," TIME reports.