Tickets for a public memorial service for Michael Jackson on Tuesday will be available via the internet, organisers have revealed. 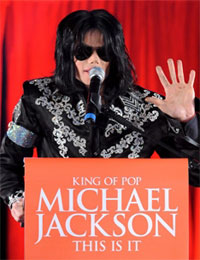 Details were announced by AEG Live, the star's promoter, which owns the Staples Center where the service will be held.

Eleven thousand free tickets are to be issued for the service. Fans from around the world can apply, BBC News reports.

Fans from all over the world have until 18:00 BST Saturday to register for one of the 17,500 tickets available to the public for the memorial, which will be held at the Staples Center, in Los Angeles.

The centre had been used by Jackson to rehearse for his run of 50 shows at the O2 Arena in London.

Initially the tickets were only available in pairs to US residents, but an outcry from fans across the world led organisers AEG to change the site so anyone can apply.

But the site collapsed after being bombarded with half a billion hits by yesterday morning, according to the Jackson family, InTheNews reports.

In the meantime it became known that the service will be broadcast live on television and the internet and is expected to attract a global audience of hundreds of millions.

It will be held on Tuesday at the Staples Center, the home of the Los Angeles Lakers basketball team, and a large area around the stadium will be barricaded off, The Telegraph reports.