Euro-zone unemployment rate rose more than expected and to the highest level for a decade in May as more companies laid off staff in a bid to survive the deepest recession since World War II, official data showed Thursday. 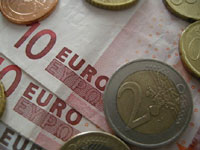 The euro-zone jobless rate rose to 9.5% in May from an upwardly revised 9.3% in April, the highest level since May 1999 and 2.1 percentage points higher than in May last year, the European Union's Eurostat statistics agency said.

The increase was stronger than the market consensus estimate of a rise to 9.4% from a Dow Jones Newswires survey of economists last week. April's jobless rate was also revised up from 9.2% reported last month, Wall Street Journal reports.

Eurostat calculated that 3.4 million people in the currency zone lost their job in the year from May 2008, when joblessness had stood at 7.4 percent.

Some 5.1 million joined jobless queues across the 27-nation EU in the 12 months from May 2008, when EU unemployment was just 6.8 percent, Reuters reports.

In the meantime producer prices in the 16-nation euro zone fell 0.2% on a monthly basis and 5.8% on an annual basis in May, according to the Eurostat statistics agency. On an annual basis, energy prices fell 14% while intermediate goods prices dropped 5.9%. The biggest rise was for durable consumer goods, up 1.4%. Consensus expectations were for a 0.1% monthly rise and a 5.6% annualized fall, MarketWatch reports.