Germany urges USA to deal with its financial crisis

The European Union and German Chancellor Angela Merkel on Tuesday urged the United States to deal with its financial crisis and urged U.S. lawmakers to quickly reverse their vote to reject a a US$700 billion (EUR 488 billion) bank rescue plan. 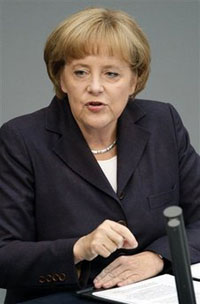 Germany urges USA to deal with its financial crisis

He said the 27-country EU was disappointed the U.S. House of Representatives rejected the rescue package for the financial markets Monday. He said a reworked version should be approved swiftly.

"We expect that the decision will go through soon," said Laitenberger. "The turmoil that we are facing has originated in the United States. It has become a global problem. The United States have a special responsibility in this situation."

German Chancellor Merkel said Tuesday that the quick passage of a rescue package is "the precondition for creating new confidence on the markets - and that is of incredibly great significance."

"The last hours have once again shown that European authorities are assuming their responsibilities," said Laitenberger. "This again shows that public authorities in Europe can live up to the task of preserving financial stability and protecting savings."

Belgium, France and Luxembourg said they would inject almost Ђ6.4 billion (US$9.2 billion) to keep Dexia afloat, the second Belgian bank this week to get a government and shareholder bailout.

In Ireland, the government issued a sweeping guarantee to insure deposits and bank borrowings against a potential collapse and shares subsequently surged.

"The system is coping," he said.

French President Nicolas Sarkozy, who holds the EU's presidency, said Europe's four main economic powers were to meet in Paris in the coming days to prepare for a larger summit to deal with the meltdown.