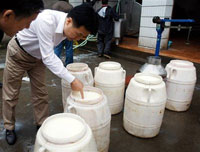 Police in Hebei province seized more than 480 pounds (220 kilograms) of melamine in the raids, the official Xinhua News Agency said.

Authorities found that melamine was produced in underground plants and sold to breeding farms and purchasing stations, the report said.

Xinhua said 19 of the 22 detainees were managers of pastures, breeding farms and purchasing stations. It did not say when the raids took place.

Melamine is the chemical at the heart of China's tainted milk scandal, blamed for causing kidney stones or other illnesses in some 54,000 children. Four deaths have been blamed on the bad milk.

Authorities say milk suppliers may have added melamine to watered-down milk because the chemical deceives quality tests by registering as protein.

A suspect surnamed Gao reportedly said he had been producing "protein powder" since late last year, Xinhua said. He said a man surnamed Xue helped him sell the powder to milk purchasing stations.

The report also said a farmer surnamed Geng began lacing his milk with melamine in order to pass quality tests for Sanlu Group Co., based in Hebei's capital city of Shijiazhuang.

The scandal broke this month when authorities said infant formula produced by Sanlu was causing kidney stones in babies and young children. Subsequent tests revealed melamine contamination in products ranging from yogurt to candy to pastries.

Countries around the world have removed items containing Chinese milk ingredients from store shelves or banned them outright.

Authorities in China had previously arrested at least 18 people and detained more than two dozen suspects in connection with the scandal.