Elections in Belarus doomed to stay beyond recognition

Opposition activists called Monday for the United States and European Union not to recognize the results of parliamentary elections swept by supporters of Belarusian President Alexander Lukashenko, who had promised the vote would meet international standards. 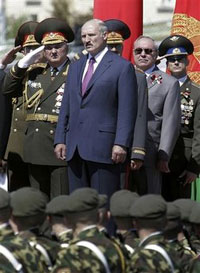 Elections in Belarus doomed to stay beyond recognition

Election officials insisted the election was free and fair, even though none of the 70 opposition candidates won seats in parliament, with results from all 110 voting districts counted.

She said more than 75 percent of eligible voters cast ballots in Sunday's election.

"We can't say that the opposition has lost since in fact there was no election," Valentina Svyatskaya of the Belarusian Popular Front told The Associated Press.

Lukashenko is a former collective farm boss who has run the small nation since 1994, quashing independent media, squeezing opposition groups and running the country with a Soviet-style command economy. Long a close ally of Russia, Lukashenko had in recent months sought to mend fences with the West, which has slapped harsh sanctions on government figures and key industries.

He has freed several opposition figures considered political prisoners by the West and he had promised that the vote would be unprecedented in fairness. Opposition candidates were allowed to run - in contrast to the national elections four years ago when not were even allowed to run.

"A theater featuring a single actor continues to exist in Belarus," said Sergei Kalyakin, a communist leader allied with opposition groups. "It will be very difficult for West to step over its principles to recognize the elections."

The Organization for Security and Cooperation in Europe - whose vote assessments are widely considered authoritative - was to release its report later Monday.

After polls closed Sunday, about 500 opposition supporters turned out on a central Minsk square to protest the vote and several hundred marched to the headquarters of the country's secret police. The protest ended peacefully after three hours. No uniformed police were visible, but there appeared to have been plainclothes officers in the crowd.

Opposition protests in the past have often been crushed by police in scenes that have helped earn Belarus a reputation as Europe's last dictatorship.

Lukashenko's attempt to improve relations with the West is believed to reflect concerns about its reliance on neighboring Russia, which has cut the subsidized oil and gas exports that have helped keep the Belarusian economy afloat.

Alexander Kozulin, a leading opposition member who was among prisoners released last month, said Sunday that the West should not "close the door" on the Belarusian government even though the election was not free.

But after the results were announced, he sounded bitter.

"Lukashenko himself closed the door that the West was trying to open for him," Kozulin said.

"Lukashenko for 14 years has shown that he is a people's president, and we won't allow the opposition to interfere," 84-year-old Grigory Gurevich said, proudly displaying his military medals as he voted.