Mortar rounds hit a base of African Union peacekeepers and nearby neighborhoods in the Somali capital, killing at least 11 civilians and wounding nearly 40, witnesses and doctors said Wednesday. Islamic insurgents claimed responsibility for the attack. 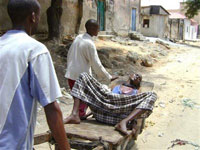 The AU troops fought back Tuesday night, but did not shoot at residential areas, said Barigye Bahoku, the spokesman for the peacekeepers. He said no soldiers died or were wounded.

It was the second major attack claimed by insurgents in the capital this week, and hundreds of Somali citizens fled the besieged city on Wednesday morning in minibuses, on foot or on donkeys, according to an Associated Press reporter on the scene.

In Somalia, civilians often are caught in the cross fire between insurgents and the peacekeepers.

"AU peacekeepers say they are defending (themselves), but you can imagine the consequence of them defending themselves with heavy weaponry in populated areas," said Ali Sheik Yasin of the Elman Human Rights group. "What is worse than that is people then suffer government troops' operations the next morning."

On Monday, 30 people died in fighting in the capital.

In Tuesday night's attack, residents reported seeing mortar shells hit neighbors near the base as they scrambled for shelter. In total, they reported at least 11 civilians killed. The witnesses were in different neighborhoods of southern Mogadishu, where the attack occurred.

"Two young men died after they were hit by a mortar, as they were running for cover in our neighborhood," said Jama Haji Dahir, a local elder.

"Five civilians, including three women, were killed when they were hit by an artillery shell," said resident Shamso Abdi Dahir.

Another round of mortars hit a camp housing displaced people near the AU base, killing four people, said citizen Aden Mohamed Muktar.

Doctors at Mogadishu's main hospitals said they had admitted nearly 40 people wounded in the overnight attack.

On Wednesday morning, one fleeing resident, Dahabo Abdi, carried her youngest child on her back as three older children trouped alongside her, holding bedding. Abdi said she did not know where she was going. "All I know is I want to get to somewhere safer," she said.

Two insurgent groups claimed responsibility for the attack: the Council of Islamic Courts and a new group loyal to a cleric whose militia controls the southern port town of Kismayo and areas near the Kenyan border.

Somalia has not had an effective central government since 1991, leaving the country in the grip of violence and anarchy.

Islamic militants have been battling Somalia's fragile government and its Ethiopian allies since December 2006, when Ethiopian troops ousted the Islamists from the capital and much of southern Somalia, which they had controlled for six months.

Thousands of civilians have died in the fighting and hundreds of thousands more have fled the capital.