Ukraine plunges into yet another deep political crisis 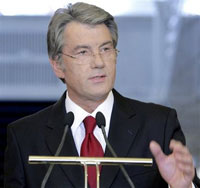 Ukraine plunges into yet another deep political crisis

The nine-month-old alliance composed of parties loyal to Ukrainian President Viktor Yushchenko and his 2004 Orange Revolution partner, Prime Minister Yulia Tymoshenko, fell apart following months of infighting between the two leaders. They have become fierce rivals ahead of a presidential election scheduled for 2010.

It is the latest setback in the country's four-year-old embrace of democracy, amid growing tensions with Russia following its war with Georgia last month. Ukrainian politicians are split between those condemning the Kremlin and determined to push for membership in NATO, and those weary of antagonizing their giant neighbor.

"I officially announce the termination of the democratic coalition in the Verkhovna Rada," parliament speaker Arseniy Yatsenyuk told lawmakers, referring to the Ukrainian legislature. "It is yet another democratic challenge, but I hope that together we will overcome this challenge."

The parliament now has 30 days to form a new coalition; if it fails, a new election will be called. That would be the third parliamentary vote in as many years and another blow to hopes for quick reforms in Ukraine and its integration with the West, which both leaders campaigned for.

The two leaders have engaged in a political tug-of-war since Tymoshenko regained the premiership in December, accusing each other of corruption and incompetence and blocking each other's policies.

The final straw came when Yushchenko accused Tymoshenko of acting in the Kremlin's interests by failing to condemn Russia's war with Georgia. Tymoshenko fired back that Yushchenko's overwhelming support of Georgia was dragging Ukraine into the conflict.

Tymoshenko then teamed up with the Russia-friendly opposition to pass a law that trims presidential powers and boosts her own. Yushchenko called that a coup attempt, and his party pulled out of the coalition.

The infighting dealt a devastating blow to Yushchenko's popularity and that of his party.

According to a poll conducted this month by the Kiev International Sociology Institute, should an election be held, Tymoshenko's party would get 24 percent, the Russia-friendly Party of Regions would garner 23 percent and Yushchenko's bloc less than 4 percent.

The poll comprised 2,036 respondents across the country and had a margin of error of plus or minus 3.3 percentage points.

Some analysts predict that if a new coalition can be formed to avoid elections, it may involve the Party of Regions, making the new government more friendly toward the Kremlin.