North Korea's Kim Jong Il urged his people to work hard to reap a bountiful harvest, the communist country's main newspaper said Monday, though the ailing leader remained out of sight on one of Korea's biggest holidays. 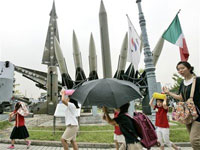 Kim, though reclusive, traditionally makes an appearance around Thanksgiving, which fell this year on Sunday and continued into Monday in South Korea. However, he has not been seen in public in weeks, and his failure to show up for North Korea's key 60th anniversary celebrations last week spurred speculation that he is seriously ill.

South Korean officials say Kim, 66, is recovering from a stroke. Kim, who is believed to have diabetes and heart disease - ailments that doctors say make him a prime candidate for a stroke - reportedly underwent brain surgery last month but still suffers from sporadic convulsions.

Kim is recovering but still has trouble moving his limbs, and will need a long period of rest and rehabilitation, Kyodo cited the sources as saying.

The South Korean Unification Ministry, which handles relations with North Korea, said it could not confirm the report.

North Korea denies Kim is ill. But a pro-North Korean newspaper based in Japan, the Chosun Sinbo, has reported that the leader did not appear at the Sept. 9 anniversary parade, South Korea's JoongAng daily said.

Kim, who serves as commander in chief of the North Korean army, was not seated at the VIP podium reserved for party elite, the Chosun Sinbo report said.

Kim rarely has missed a military parade since becoming commander in chief in 1991. The 60th anniversary parade was meant to showcase North Korea's military might - but ended up a muted affair. Chosun Sinbo said Kim himself decided to deploy reserve forces - rather than active military - for the scaled-down parade.

Kim, revered as the "Dear Leader," rules the country of 23 million with an iron fist. Any official word that he is incapacitated could threaten the leadership he inherited from his father, North Korea founder Kim Il Sung.

Kim Jong Il, who became leader after his father died in 1994, has not named a successor. Analysts say none of his three sons is ready to take over, but South Korean government officials confirmed to South Korea's Chosun Ilbo newspaper that all three are in Pyongyang.

The Unification Ministry said Monday it could not confirm the report.

"That showed Kim is clearly in control of North Korea" even as he recovers, Paik Hak-soon, a North Korea expert at South Korea's private Sejong Institute, said Monday.

In a Thanksgiving editorial, North Korea's main newspaper, Rodong Sinmun, emphasized the importance of maintaining national unity and loyalty to Kim. A Tuesday editorial said "all workers should take part in the autumn harvest," calling it North Korea's most urgent task.

The World Food Program has appealed for US$60 million for the impoverished, isolated nation, saying it needs the emergency funds to feed 6.3 million hungry North Koreans.

The North has resorted to handouts since its economy collapsed in the mid-1990s. Flooding in 2007 exacerbated the food shortage.

The Rodong Sinmun on Monday quoted Kim as saying North Koreans "should mobilize all available capability for the autumn harvest." The report did not say when Kim made the remarks.