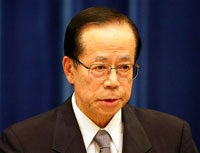 Fukuda, in office less than one year, said Monday he was stepping down because he was unable to break a deadlock with the emboldened Democratic Party of Japan over virtually all of his major policy objectives.

The opposition immediately derided Fukuda for quitting, and called for elections to test the ruling party's seemingly crumbling mandate with the voters.

Aso, 67, moved to dispel criticism of a power vacuum. The ruling Liberal Democratic Party's secretary-general said he felt he was capable of succeeding where Fukuda failed and had demonstrated that he has ideas of his own.

"I must take leadership," Aso said in a strong indication that he will run when the Liberal Democrats vote for a new party president on Sept. 22. Party officials said campaigning will officially begin Sept. 10.

After being selected as Liberal Democratic Party president, the leader would be subject to a vote in parliament for approval as prime minister. But that is largely a formality because of the party's majority with its junior coalition partner in the powerful lower house.

It was not clear when the parliament vote would take place. Parliament was to reconvene on Sept. 12 for an extraordinary session, but officials said that was likely to be delayed.

Aso, named just weeks ago as LDP secretary-general, has a gruff, outspoken manner that apparently works well with voters. But his off-the-cuff comments have ruffled feathers at home and abroad. He has angered China for saying it was a military threat.

He comes from solid political stock.

Aso's grandfather was Prime Minister Shigeru Yoshida, who negotiated the peace treaty ending World War II. Aso also has an engaging personality, having gone to the Olympics on Japan's skeet shooting team in Montreal in 1976 and being a well-known fan of comic books.

"Mr. Aso seems to be the front-runner at the moment," said Koichi Nakano, a political scientist at Sophia University. "But whether he is a capable prime minister is a different story."

Whoever replaces Fukuda will face a difficult task.

Although the ruling Liberal Democrats have largely dominated Japanese politics since World War II, the opposition, led by the Democratic Party, has recently been winning new ground and now controls the upper house of parliament.

With voters concerned about rising food and fuel prices, and a general dissatisfaction with the Liberal Democrats' seeming lack of direction, the Democratic Party of Japan is calling for snap elections - and analysts believe they could make big gains.

A general election must take place by September next year, but the prime minister can call one at any time.

"We are going to see snap elections soon, maybe around the end of this year. Holding elections is the only way to bring about a breakthrough for the political deadlock," said Hiroshi Kawahara, political science professor at Waseda University.

Kawahara said the elections would likely help the opposition.

"If snap elections take place, it will be a great chance for the DPJ to grab power," he said. "The DPJ may even win votes from LDP supporters, as many voters are very fed up with the LDP's dismal performance."

The Liberal Democrats, fearing losses at the polls, had tried desperately to turn things around under Fukuda, who just last week announced an US$18 billion stimulus package to buoy the economy. Several weeks ago he reshuffled his Cabinet in an unsuccessful attempt to renew public faith in his government.

Fukuda apparently believed the situation would get only worse under his leadership, but his sudden decision to throw in the towel has been widely panned.

"This is such irresponsible politics," the Mainichi newspaper said in an editorial. "It is abnormal that two prime ministers in a row quit after a short period of time, and it's hurting national interests."