With Katrina in mind, Bush heads to Texas to say hello to Gustav

As Hurricane Gustav threatens the U.S. Gulf Coast, President George W. Bush is out to show America that his government has learned the haunting lessons of Katrina and is ready to act. 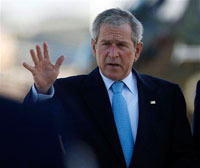 With Katrina in mind, Bush heads to Texas to say hello to Gustav

That includes a rapid response by Bush himself, who will be planted near the danger zone even before the storm hits home.

Bush leaves Monday morning for Texas, a staging ground for emergency response efforts and a shelter state for Gulf Coast evacuees. The president is expected to visit Austin and San Antonio on the same day that Gustav, already a deadly force, is likely to make landfall in the United States.

Hurricane conditions are predicted anywhere from the coast of Texas to the Alabama-Florida line, including New Orleans in between.

This was supposed to be the day that Bush stepped into the 2008 presidential race in his most prominent way to date. But he scuttled his prominent speech at the Republican National Convention, which was to tout Sen. John McCain, in favor of his own presidential duty.

The entire convention lineup was cut back, in fact, as a nation still scarred by the disastrous Hurricane Katrina turned its attention to the new storm.

Ahead of his trip, Bush got a briefing Sunday at the Federal Emergency Management Agency, the operation of so much scorn under Bush's leadership during Katrina.

He promised to get state and local officials what they need. He implored residents to evacuate as ordered. He warned that serious flooding could return.

"The message to the people of the Gulf Coast is, this storm is dangerous," Bush said.

His underlying message was that the government will do better this time. More preparation. Faster response. Better coordination. Total attention.

It was a lesson summed up this way Monday by Homeland Security Secretary Michael Chertoff: "Planning, preparation and moving early," Chertoff said in a series of appearances on morning network news shows.

This time, Chertoff said, the evacuations, especially of the infirm and those who needed extra help leaving, were successful.

"I'm pleased to say it looks like we got everybody out yesterday before the storm," Chertoff said.

He said he had spoken with Bush, who was "very focused" on Gustav, especially the concern "that all of the elements of federal power be made available to assist in the response."

Even first lady Laura Bush was involved in the Bush administration's effort to stress that things would be different this time. "Mistakes were made by everyone" at all levels of government in the handling of Katrina, Mrs. Bush said Monday on CNN. "Part of it was not being able to have the good communication that you would need between the three governments. And we have taken care of that, we know that's a lot better. And the lessons that were learned from Katrina can serve the United States very well in any kind of disaster."

The enduring memory of Katrina is not the ferocity of the storm, but the bungled reaction that led to preventable deaths and chaos. Disaster response has undoubtedly improved since then. But Katrina was a low chapter in American history, and it deeply eroded credibility in Bush's administration.

Scott McClellan, the president's press secretary at the time, wrote this year that the White House was in a "state of denial" for the whole first week of Katrina. The White House has taken issue with McClellan's book, which described the Katrina response as "one of the biggest disasters in Bush's presidency."

By flying to Texas, Bush clearly wanted to show America, and particularly people of the Gulf Coast, that he is committed to answering their needs. He said he hopes to get to Louisiana, too, but will choose a time that does not interfere with emergency response efforts.

Thousands fled New Orleans under a mandatory evacuation orders as New Orleans Mayor Ray Nagin warned that looters will be sent to jail. Bush called Nagin on Sunday and told the mayor he was "ready to go through this again with him," according to White House spokeswoman Dana Perino.

Bush has had a visible role in relief efforts, especially after Katrina, but also in natural disasters that preceded it.

But heading to the site of a disaster even before it is expected to happen is highly unusual, and a measure of the stakes surrounding this storm.

Bush said local leaders should get "everything they need from the federal government to prepare for what all anticipate will be a difficult situation." As for the people of the battered Gulf Coast, Bush said: "They've made it through great challenges in the past and they're going to make it through this one."

Still, he was also careful not to be rosy during his comments at the emergency response headquarters in Washington.

Even though the president said levees are "stronger than they've ever been," he said people throughout the Gulf Coast, especially in New Orleans, "need to understand that in a storm of this size there is serious risk of significant flooding."