In April 2003, Barack Obama rose in the Illinois Senate to discuss a delicate issue: legislation calling for a study of whether police discriminate against black drivers by making up excuses to pull them over. 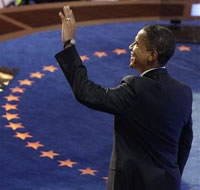 It was the perfect moment for an elegant speech exploring the worries of black Americans and the duties of police officers trying to protect the public. Instead, Obama delivered a two-minute summary filled with jargon like "data collection process" and "management tools."

He was about as emotional as a tax attorney.

It may be hard to believe now that Obama is celebrated for his skill as a speaker, but oratory is a relatively new political tool for him.

His comments in the Illinois Legislature were typically brief and matter-of-fact. He was stiff and professorial on the campaign trail.

When he ran for the U.S. Senate, his speeches offered more humor than passion.

Today, by contrast, Obama's speeches are a big reason he has become the Democratic presidential nominee.

His keynote address at the 2004 Democratic convention made him a national figure. A fire-up-the-crowd speech in Iowa helped him win that state's presidential caucus. His passionate speeches have attracted thousands upon thousands to his presidential campaign rallies. His calm analysis of race in America helped him survive the turmoil created by his former pastor's incendiary remarks.

On Thursday, Obama will take center stage at the Democratic National Convention to deliver a speech accepting his party's nomination for president.

Although Obama's campaign says he has never studied with a speech coach, experts on oratory say Obama must have honed his abilities carefully.

"It has come with a great deal of practice and a great deal of involvement" in his speech texts, said Peter Pober, a communications professor at George Mason University. "He is naturally a very gifted large-stage speaker, but he has also worked very hard at it."

In his first few years in politics, Obama was sometimes described as talking down to his audiences, coming across as a know-it-all.

He said little during debates in the Illinois Senate, even in victory.

In 1998, as a freshman in the minority party, he helped pass new ethics legislation but spoke for only a couple of minutes. He ended his comments with a stirring, "I would very much urge my side of the aisle, as well as the other side of the aisle, to provide an affirmative vote."

News stories described him as sounding like a television newscaster. A campaign speech might be a 10-minute recitation of his legislative record. He appeared uncomfortable in some news conferences and debates during a 2000 campaign for Congress.

"He recognized that, and understood the criticism," said Mark Allen, a veteran Chicago civil rights activist who knew Obama.

By 2004, when he ran for the U.S. Senate, Obama was far more comfortable as a speaker, but still not a dramatic orator. Instead, he focused on introducing himself to dubious crowds - trying to win them instead of wow them.

Using lines that still pop up in his speeches today, Obama joked about his unusual name, claiming that people sometimes got confused and called him "Alabama" or "Yo Mama." He explained that his name came from Kenya but his accent came from Kansas.

His political opponents said it was clear that Obama could hit an oratorical home run if he wanted, but that wasn't the way to pick up votes in a Senate race, particularly during the primary.

Obama found a larger stage at the Democratic convention in 2004.

John Kerry's campaign chose him _ a promising minority candidate with a chance to pick up a Republican-held Senate seat - to deliver the convention's keynote address.

Kevin Lampe, a Chicago-based public relations consultant who helped with speech logistics at the convention, remembers Obama working hard to learn to read from a TelePrompTer, aiming his comments at both the TV audience and the crowd in the auditorium, and perfecting his delivery. Political speech coach Richard Greene considers Obama's convention appearance the most successful political speech in American history.

"Obama would not be where he is or even close without that 2004 keynote," said Greene, author of "Words That Shook the World: 100 Years of Unforgettable Speeches and Events."

The speech analysts say Obama still has some work to do to connect with individuals, not just big crowds.

With his ummms and ahhhs and occasionally stiff manner, they see him as less successful in more intimate settings.

"If the voter base begins to feel like all he's interested in is the big numbers and isn't interested in the individual, especially those independents and crossover Republicans," Pober said, "that will be problematic."