The Russian president appealed to the leaders of China and four Central Asian countries for their support in the escalating crisis over Moscow's intervention in Georgia and its recognition of the country's separatist regions. 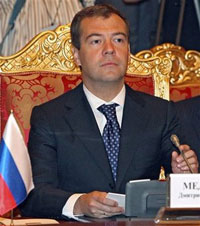 Speaking at a Shanghai Cooperation Organization (SCO) summit in this impoverished country, located north of Afghanistan, Dmitry Medvedev once again called Georgia the aggressor in the recent conflict, and said support for Russia would serve as a "serious signal for those are trying to justify the aggression."

Medvedev's appeal came in the midst of Western furor over what it sees as Russia's excessive use of force in the Georgian war. Europe and the U.S. have also criticized Russia's stationing of troops in what it has called security zones near two separatist regions, South Ossetia and Abkhazia, as well as Moscow's formal recognition of those regions.

Russian leaders, meanwhile, have blamed NATO expansion and Western support for Georgia for raising the specter of a new Cold War.

That threat seemed to grow, as U.S. and Russian warships steamed to positions off of Georgia's Black Sea coast and Russia warned tiny Moldova, another former Soviet nation, that aggression against a breakaway region there could provoke a military response.

Dmitry Peskov, spokesman for Prime Minister Vladimir Putin, told reporters Wednesday that China's refusal so far to recognize South Ossetia or Abkhazia did not mean that China was joining Western opposition to Russia's actions in Georgia.

"The fact that - you have mentioned China - with China, they have not accepted this independence or have not extended support to Russia in this decision, does not mean that China is isolating Russia," he said.

Iranian leader Mahmoud Ahmadinejad, who has lobbied vigorously but unsuccessfully for his country to join the SCO, also attended the summit.

Addressing the other heads of state, he accused "Western powers" of interfering in the Central Asia region and hindering its independent development.

While Ahmadinejad failed to win membership for Iran, Medvedev said Thursday that the door was open to SCO enlargement, according to the RIA Novosti news agency.

China has traditionally been wary of supporting separatist movements, mindful of its own problems with Tibet and what it describes as radicals seeking to establish a Muslim state in the western territory of Xinjiang.

Chinese Foreign Ministry spokesman Qin Gang was quoted by state news agency Xinhua as saying "the situation in the region ... should be resolved in dialogue."

All may be reluctant to strain their relations with Europe and the United States.

In Central Asia, Kazakhstan enjoys significant Western investment in its rich hydrocarbon sector and impoverished Kyrgyzstan hosts a U.S. air base on its territory for an annual return of US$150 million in the form of aid and rent.

Kazakhstan's Deputy Foreign Minister Nurlan Yermekbayev told Russia's RIA-Novosti agency that his country was undecided on the status of the rebel regions.

"It is still too early to talk about that," Yermekbayev said in Astana.

Uzbekistan came under severe Western criticism after the government's violent crackdown on a 2005 uprising in the eastern town of Andijan, but the country has recently made tentative moves to mend its ties with the United States.

The SCO was created in 2001 as a forum for its members to improve regional coordination on terrorism and border security.

Western observers have long suggested the SCO was intended as a direct counterweight to NATO and part of an effort to dilute U.S. influence in the region - a suggestion senior organization officials have rejected.

Among the countries that sent observers were India, Pakistan, Mongolia and Afghanistan, whose delegation was headed by President Hamid Karzai.