Two cockroaches race to US presidency

This presidential race was no contest: John McCain sped to the finish while Barack Obama was reluctant to leave the starting point. 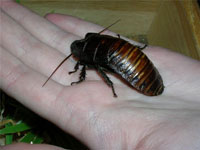 Two cockroaches race to US presidency

Of course there's no guarantee giant Madagascar hissing cockroaches will predict the real result in November.

Organizers liken the race's prediction success to that of Punxsutawney Phil on Groundhog Day, when lore says the rodent can predict how long winter weather will last depending on whether he sees his shadow.

The Madagascar hissing cockroach (Gromphadorhina portentosa), also known as Hissing roach or simply Hisser, is one of the largest species of cockroach, reaching 2-3 inches at maturity. They are from the island of Madagascar off the African coast, where they can be found in rotting logs.

Unlike most cockroaches, they are wingless (though this is also true of some other wood-dwelling roaches). They are excellent climbers and can easily scale smooth glass. Males can be distinguished from females by their thicker, hairier antennae and the pronounced "horns" on the pronotum. Females carry the ootheca (egg case) internally, and release the young nymphs only after the eggs have hatched. As in some other wood roaches, the parents and offspring will commonly remain in close physical contact for extended periods of time. In captivity, these insects can live 5 years. They feed primarily on various types of vegetable material.

The Madagascar cockroach has become a popular pet because of its hissing sound, large size and appearance. Their nickname, "hissing cockroach", is due to their ability to force air through the breathing pores (spiracles) found on their abdomen. The Madagascar hissing cockroach is believed to be the only insect that can hiss in this exact manner, as most insects that make a "hissing" sound do so by rubbing together various body parts. (Some longhorned beetles, e.g., the Giant Fijian long-horned beetle, can squeeze air out from under their elytra, but this does not involve the spiracles). This hiss takes two forms: the disturbance hiss and the fighting hiss. All cockroaches from the fourth instar (fourth molting cycle) and older are capable of the disturbance hiss. Only males use the fighting hiss; they use it when challenged by other males. This results in one of the males backing down and the fight being over. Males hiss more often than females.