Condoleezza Rice wants Russia to pay a price for Georgia

U.S. Secretary of State Condoleezza Rice is heading to Europe on Monday to talk with NATO allies about what message the West should send to Russia following its invasion of Georgia. 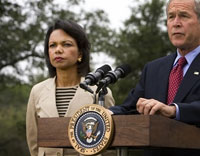 Condoleezza Rice wants Russia to pay a price for Georgia

Russia cannot use "disproportionate force" against Georgia and still be welcomed by international institutions, Rice said.

"It's not going to happen that way," she said. "Russia will pay a price."

But neither Rice nor Defense Secretary Robert Gates would be specific about what punitive actions the U.S. or the international community might take.

"There is no need to rush into everything," Gates said Sunday. "We don't want to do it unilaterally."

The White House does not want to damage existing relations with Russia or discourage its government from further integrating itself into global economic and political institutions. At the same time, U.S. officials say Russia cannot be allowed to get away with invading its neighbor.

"I think there needs to be a strong, unified response to Russia to send the message that this kind of behavior, characteristic of the Soviet period, has no place in the 21st century," Gates said.

Fighting broke out after Georgia launched a massive barrage Aug. 7 to try to take control of the separatist province of South Ossetia, which is heavily influenced by Russia. The Russian army quickly overwhelmed Georgia's forces, then drove deep into the country, bombed Georgian ports and military installations and tied up an east-west highway through the nation.

The U.S. officials told the Times that Russia deployed several SS-21 missile launchers to positions north of Tskhinvali, the South Ossetian capital. That would put the missiles within range of Georgia's capital, Tbilisi, the Times reported on its Web site.

"There's no doubt there will be further consequences," said Rice, who briefed U.S. President George W. Bush on the fast-changing crisis over the weekend at his Crawford, Texas, ranch.

Rice is then flying to Warsaw, Poland, where she will sign a formal agreement for the establishment of a missile interceptor site there. Moscow has protested the U.S. plans for such a base so close to its borders.

Rice and Gates pressed the administration's case during appearances on five Sunday television talk shows - Rice on "Fox News Sunday," CBS' "Face the Nation" and NBC's "Meet the Press," and Gates on ABC's "This Week" and CNN's "Late Edition."