Police and neighbors are struggling to explain why a man described as a loner drove more than 30 miles (50 kilometers) to Arkansas' Democratic Party headquarters and fatally shot its chairman hours after getting fired from his job. 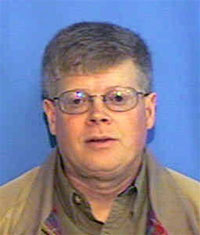 Police said Timothy Dale Johnson, 50, of Searcy, barged into Bill Gwatney's office on Wednesday and shot him multiple times. There were no signs that Gwatney and Johnson, who was later shot dead by officers, knew each other.

A Target retail store in Conway had fired Johnson early Wednesday because he had written graffiti on a wall, police said. Before noon, Johnson was in Gwatney's office in Little Rock with a handgun.

"He said he was interested in volunteering, but that was obviously a lie," said Sam Higginbotham, a 17-year-old volunteer at the party's headquarters.

After the shooting, Johnson sped away in a truck, stopped seven blocks away at the Arkansas State Baptist Convention and pointed a gun at the building's manager, police said. When asked what was wrong, the gunman said "I lost my job," according to Dan Jordan, the church group's business manager.

Officers chased the suspect to Sheridan, 30 miles (50 kilometers) south of Little Rock. After avoiding spike strips and a roadblock, the suspect emerged from his truck and began shooting at deputies and state troopers, who returned fire. Johnson later died at a hospital. Police found two guns in the truck.

Little Rock police Lt. Terry Hastings didn't say what the men discussed after Johnson entered Gwatney's office but said it was not a heated exchange.

"They introduced themselves, and at that time he pulled out a handgun and shot Chairman Gwatney several times," he said.

Police said they could find no criminal record for Johnson. "If he's got a record, it's minor," Hastings said.

Because of his position in the state party, Gwatney was a superdelegate to the Democratic National Convention this month in Denver. He declared his support for Sen. Hillary Rodham Clinton after the Arkansas primary in February but endorsed Barack Obama after Clinton dropped out of the presidential race.

Clinton and her husband, former President and former Arkansas Gov. Bill Clinton, issued a statement calling Gwatney "not only a strong chairman of Arkansas' Democratic Party, but ... also a cherished friend" and confidant.

Obama said: "Michelle and I are heartbroken to hear about the tragic loss of Chairman Bill Gwatney. We're praying for his family and friends and all who worked with him and loved him."

Johnson lived alone and had never been married, said Helen Mowrer, who lived next door to the gunman. Mowrer said both of Johnson's parents had lived at the house, but they died in the past 10 years.

Mowrer said Johnson kept to himself. "I never felt really comfortable with him," Mowrer said. "He was just kind of different."

Another neighbor said investigators visited her home Wednesday to talk about the suspect. Loretta Jones said her only contact with Johnson had been the three or four times she complained to him about his dog.

"It makes you wonder what got into somebody to do something so horrible," Jones said.

According to Conway police spokeswoman Sharen Carter, Target fired Johnson before 8 a.m. Wednesday because he had written on a wall. A manager had called police because of the graffiti but the wall had already been cleaned and Johnson had left by the time officers arrived.

The state Capitol was locked down for about an hour until police got word the shooter had been captured, Arkansas State Capitol police Sgt. Charlie Brice said.

Democratic and Republican party officials said their offices would remain closed until Monday.

A wreath featuring an elephant and donkey figures, the symbols of each party, stood outside the Democratic headquarters Wednesday evening.

"Bill Gwatney was our friend, our party's leader, and so many times our party's conscience," the party said in a statement. "Our state and our party are better for all that Bill Gwatney has done."

Gov. Mike Beebe, a Democrat who served with Gwatney in the state Senate, joined a vigil at University Hospital after what he called a "shocking and senseless attack."

Gwatney was Beebe's finance chairman during the 2006 campaign, when Democrats swept all seven statewide offices.

"Arkansas has lost a great son, and I have lost a great friend," Beebe said. "There is deep pain in Arkansas tonight because of the sheer number of people who knew, respected and loved Bill Gwatney."

Karen Ray, executive director of the Republican Party of Arkansas, sent her workers home after the shooting "out of an abundance of caution."

"He was an admirable Arkansan and gave so much to this state and his party," Republican chairman Dennis Milligan said.