Syria and Lebanon agree to negotiate demarcation of their border

Syria and Lebanon agreed Thursday to negotiate the demarcation of their border, a longtime demand of the Lebanese as they seek to normalize relations with their long dominant larger neighbor. 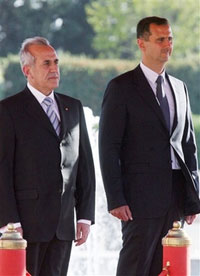 Syria and Lebanon agree to negotiate demarcation of their border

A day after the countries' presidents agreed to establish full diplomatic relations, the two men released a joint statement saying a joint committee would formally demarcate the border, which has been ill-defined since the two countries became independent from French rule in the 1940s.

The agreements on diplomatic ties and the border are a victory for Lebanese President Michel Suleiman, who traveled to Syria Wednesday in a landmark visit - the first by a Lebanese head of state to Syria in more than three years.

The border demarcation has long been a major demand of Lebanon's anti-Syrian factions, along with diplomatic ties, as a recognition by Syria of Lebanon's sovereignty and independence.

"This announcement is a historic step toward rectifying relations," said Saad Hariri, who heads the Western-backed, anti-Syrian majority in parliament. "It is time ... for (Syrian) tutelage to end once and for all," said Hariri, son of former Prime Minister Rafik Hariri, who was killed in a 2005 bomb attack blamed by many on Damascus.

It was not clear when action would be taken on the agreements. No date was set for the opening of embassies or for work on the border to begin.

There have not been any official attempts to define the border.

Syrian Foreign Minister Walid al-Moallem said at a news conference Thursday that one disputed area under Israeli control would not be demarcated while it remains under Israeli occupation.

Israel seized the area, known as Chebaa Farms, from Syria in the 1967 Mideast war. It is located where the borders of three countries meet. Lebanon and Syria claim it is Lebanese territory. But a U.N.-drawn border between Israel and Lebanon marks it as Syrian land under Israeli occupation.

The statement from the two presidents also said both sides agreed to review all bilateral agreements in an "objective" way. Many Lebanese claim that political and economic agreements signed between the two countries during the 1990s were lopsided in Syria's favor.

Syria controlled Lebanon for nearly 30 years, after sending its army in as peacekeepers during the 1975-90 civil war. Its direct hold was broken in 2005, when international pressure over the slaying of Hariri forced the troops to leave.

Even after the withdrawal, some Lebanese accused Damascus of trying to maintain its influence, saying it was encouraging Hezbollah to topple the Western-backed government of Prime Minister Fuad Saniora. They also accused Syria of being behind a string of assassinations of anti-Syria figures since 2005 to intimidate Beirut and destabilize the country.

Syria denies any role in the Hariri killing or the other attacks.

The United States, which backs Saniora, welcomed the decision to restore diplomatic ties but pushed for Syria to stay out of Lebanese affairs.

"We have long stood for the normalization of relations between Syria and Lebanon on the basis of equality and respect for Lebanese sovereignty. One of the steps that has long been required is the establishment of a proper embassy for Syria in Lebanon and vice versa," U.S. Secretary of State Condoleezza Rice said Wednesday.

"Now, if the Syrians will go ahead and demarcate the border between Lebanon and Syria, and respect Lebanon's sovereignty in other ways, then this will have proved to be a very good step," she added.

In their statement Thursday, the Lebanese and Syrian presidents also pledged to intensify efforts to determine the fate of their citizens believed to be missing in each other's countries.

International human rights groups say hundreds of Lebanese have been imprisoned in Syria since Damascus first sent troops into Lebanon in 1976. The Syrian government says it freed the last of the prisoners nearly eight years ago.