Having committed war crimes itself, Georgia accuses Russia of everything

Defeated on the battlefield, Georgia has taken its case to the U.N.'s highest court, accusing Moscow of murder, rape, and mass expulsion in two disputed Georgian provinces, according to court papers released Wednesday. 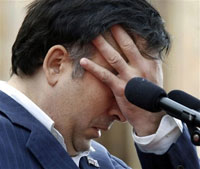 Having committed war crimes itself, Georgia accuses Russia of everything

Georgia filed its suit at the International Court of Justice on Tuesday as the two neighbors were negotiating a cease-fire to end a five-day war over the breakaway Georgian province of South Ossetia.

Georgia alleged that the fighting erupted after a series of actions by Moscow and Russian-backed separatists in South Ossetia and Abkhazia intended to prepare "for the unlawful assertion of independence from Georgia."

It appealed to the court to order Russia to cease all military action and withdraw its forces from the two districts, to enable hundreds of thousands of displaced ethnic Georgians to return home, and to pay Georgia unspecified compensation.

A spokeswoman for the court declined to say whether Russia had filed a response. But President Dmitry Medvedev has accused Georgian troops of genocide when they attacked South Ossetia last week.

The U.N. court in The Hague, informally known as the World Court, deals with disputes among U.N. member states. If the judges accept jurisdiction, their decisions are not subject to appeal. The court has no power of enforcement.

Georgia's suit accused Russia of violating the 1965 Convention on the Elimination of All Forms of Racial Discrimination since 1990.

Georgia claimed the Russians, along with separatists acting on Moscow's direction, expelled 300,000 ethnic Georgians from the two districts in the early 1990s after the Soviet Union collapsed and Georgia became independent.