Thailand's Supreme Court issued an arrest warrant Monday for ousted Prime Minister Thaksin Shinawatra after he and his wife failed to appear at a corruption hearing and fled to Britain. 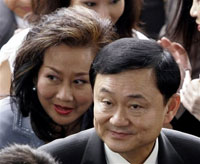 Thaksin and his wife Pojaman had been allowed to travel to China for the Olympics opening ceremony despite an array of corruption charges. The former leader issued a statement Monday saying he would not return to Thailand because he could not expect justice in Thai courts.

"My wife and I have come to reside in England," he said in the handwritten statement, which was read on state-run television and faxed to various media outlets.

Thaksin's lawyers and spokesmen did not respond to repeated calls for comment.

The Supreme Court issued arrest warrants for Thaksin and his wife for failing to attend Monday's hearing and ordered them to forfeit bail totaling 13 million baht (US$389,000).

Thaksin, who was deposed in a 2006 military coup, faces a slew of court cases and investigations into alleged corruption and abuse of power during his five years in office. In his statement, he insisted he was innocent of all accusations against him.

Thailand's stock market closed 1.8 percent higher amid hopes that Thaksin's removal would defuse political tensions between his supporters and opponents. Political uncertainty has contributed to a 19 percent fall in the index since regular anti-government protests began in late May.

Analysts, however, said Thaksin's decision to reside in England did not mean the end of his extensive power.

"He is certainly going to use his foreign base to influence Thailand's domestic politics," said Charnvit Kasetsiri, a historian at Bangkok's Thammasat University. "This is certainly not the end."

Although his departure could reduce short-term political tension, "there may be a serious conflict in the long run that results in extreme violence if some decide they cannot rely on the judiciary for justice," he said.

The key anti-Thaksin group, the People's Alliance for Democracy, said it would continue its street protests until the government of Prime Minister Samak Sundaravej is removed from office. It regards Samak as a proxy for Thaksin.

Thaksin "still has influence over this government and is pulling the strings," said Piphop Thongchai, a PAD leader.

Thaksin and his wife left Thailand last week after the court gave them permission to attend the Olympic Games but ordered them to report Monday. They reportedly flew from China to England, where the former leader owns several properties and the Manchester City football club.

Thaksin lived in exile in London after his ouster and returned to Thailand earlier this year to face the corruption charges against him after his political allies won elections and formed a new government.

"I thought I would be able to prove my innocence and receive justice, which is why I returned to Thailand on Feb. 28. But the situation has deteriorated," Thaksin said.

On July 31, the criminal court found his wife guilty on charges of evading millions of dollars in taxes and sentenced her to three years in prison. She was released on bail.

Thaksin also said there had been threats against his life.

"I have also constantly received news that my life is not safe. Wherever I travel, I have to use bulletproof cars. This is the result I got from having volunteered to serve the country, the king and the people," he said.

Monday's Supreme Court hearing involved charges of abuse of authority and corruption for Pojaman's 2003 purchase of a valuable plot of land in Bangkok at a favorable price from a state agency. The court earlier said it would deliver a verdict Sept. 16.

Three other cases against Thaksin have gone to court, and many others are under investigation.

Thaksin was widely regarded as an authoritarian figure who eroded Thailand's still-fragile democratic institutions. Mass street protests led to his ouster in the military coup.

However, he was highly popular with the country's rural masses and urban poor for his populist policies, and was elected with landslide victories.