Tonga’s king to give up his powers to parliament

Tonga's King George Tupou V has agreed to give up much of the near-absolute power his family has held for generations over his tiny South Pacific nation in favor of a mainly elected parliament, his official spokesman said. 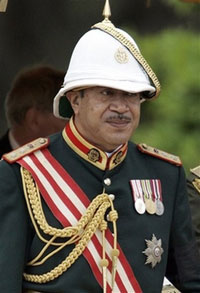 Tonga’s king to give up his powers to parliament

The announcement late Monday was made just two days before Tonga begins lavish coronation ceremonies to formally enthrone George V, a hugely ceremonial event that is expected to bring Tonga to a standstill for four days and be watched throughout the region.

The decision moves Tonga a step closer to giving up its absolute monarchy. It is one of just a handful of countries in the world where the monarch runs the government day-to-day.

"The Sovereign of the only Polynesian kingdom ... is voluntarily surrendering his powers to meet the democratic aspirations of many of his people," the king's palace spokesman, Fielakepa, the Lord Chamberlain, said late Monday. Like many Tongan nobles, Fielakapa uses just one name.

The people "favor a more representative, elected parliament. The king agrees with them," he said in a statement. No time frame was given for the proposed changes to take effect.

Under the changes, George V, 60, will relinquish his role in day-to-day government affairs and he will be guided by the prime minister "in all matters of governance," Fielakepa said.

This includes the king being "strictly impartial" in meetings with Cabinet ministers and lawmakers and not making personal statements on political issues.

The announcement comes as pressure builds on the monarchy to end its iron grip on power. While highly respected as the country's top chieftains, the royal family's reputation has been stained in many people's view by scandals and mismanagement that contributed to the country's failure to lift itself out of poverty.

The palace has for years promised democratic reforms, but progress has been slow and public dissatisfaction has been building. Tensions at a pro-democracy rally in the capital, Nuku'alofa, boiled over into riots in 2006 that killed eight and left downtown razed.

Since ascending the throne in 2006 after the death of his father, Tupou IV, the new king has promised to speed up the reforms.

Last week, parliament approved a special commission to develop plans to change the system of government enshrined in the nation's 1875 constitution. The changes will likely take effect after 2010 elections.

Also last week, the government announced George V had completed a promise to sell off his business interests - stakes in Tongan government companies that had enriched the royal family for years.

"I'm happy and I'm sure the majority of people here in Tonga, they are happy, seeing our struggle, our push for political change has come to an end," he told New Zealand's National Radio.

Clive Edwards, a former Cabinet minister and pro-democracy lawmaker, said the king's move showed he is in touch with the sentiment for change in Tonga.

"It will contribute significantly to the peace and welfare of this country and reduce the agitation and concern people have held for a long time over this issue of reform and change," he said. "What he's done is very timely."

Fielakepa said George V was making the changes to ensure the monarchy is ready for the 2010 elections, which will be held under a revised voting system that will transfer the majority voice in parliament to the people.

Currently the king appoints the prime minister and 13 Cabinet ministers. Noble families - who have close ties to the king - choose nine others and just nine lawmakers are elected by voters.

George V is to be formally installed at his coronation on Friday - the ceremony was delayed by rioting in the capital in November 2006, just two months after his father died and his ascension. He has indicated he wants to shed the playboy image that built up around him when he was crown prince - he travels most places in Tonga in an imported London cab - and restore public confidence in the royal family.

The king's father, Tupou IV, became embroiled in scandals during his 41-year rule - one of the longest by any sovereign and exceeded only by Thailand's King Bhumibol Adulyadej, Britain's Queen Elizabeth II and Samoa's King Malietoa Tanumafili II.

Businesses and scams the royals were involved with in recent years included taking ownership of the privatized monopoly Tongan power and telecommunications companies, satellite communications systems and a failed airline.

Tupou IV was also implicated in Tonga giving a self-styled court jester and con man more than US$60 million to invest - only to lose it all on the funeral insurance market in the United States.

"In the Tonga of his reign, there will be no turning back from modernization, renewal and democracy," he said.