Radovan Karadzic to be extradited before Tuesday

Radovan Karadzic's lawyer said he expected his client to be extradited before a Tuesday evening anti-government rally by ultranationalist supporters of the war crimes suspect. 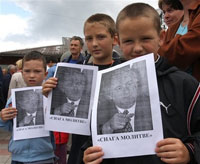 Radovan Karadzic to be extradited before Tuesday

The rally organizers - the right-wing Serbian Radical Party - plan to bus Karadzic's supporters from all over Serbia and Bosnia. There are fears of violence on Belgrade streets and that the ultranationalists will try to prevent Karadzic's extradition by force.

The war crimes court in Belgrade that is dealing with the case of the ex-Bosnian Serb leader said Monday that his appeal had not arrived by the start of morning office hours.

Karadzic's lawyer Svetozar Vujacic said he mailed the appeal at the last possible moment late Friday, trying to delay Karadzic's extradition to the tribunal in The Hague, Netherlands, for as long as possible.

"Karadzic is a Bosnian Serb citizen, so it would be logical that the appeal was mailed from Bosnia," Vujacic said Monday. "I wouldn't rule out that my appeal grows a beard and mustache before it gets here."

Karadzic faces 11 charges at the U.N. tribunal, including genocide and conspiracy to commit genocide. He is accused of masterminding the 1995 slaughter of 8,000 Muslim men and boys in Srebrenica and the 3 1/2 year siege of Sarajevo, which left 10,000 people dead.

Officials say the war crimes suspect was captured a week ago in Belgrade, where he lived under an assumed identity. His lawyer claims that Karadzic was kidnapped July 18 and held for three days by unknown captors.

Vujacic said late Sunday that he wants to prevent his client's extradition before the rally scheduled for Belgrade on Tuesday evening.

"They (the authorities) are using all illegal means to try send him to The Hague before the rally," Vujacic said.

"Karadzic and I want to make sure it does not happen before Tuesday," Vujacic said. "But we are unfortunately aware the extradition will take place" before the rally.

A spokeswoman for Serbia's war crimes court, Ivana Ramic, said the letter with Karadzic's appeal had not arrived by the start of working hours Monday.

"For now, it hasn't arrived," Ramic told The Associated Press.

Once Serb judges decide on the appeal - which they are likely to reject - the case will be handed over to the Serbian government, which issues the final extradition order.

Karadzic's brother Luka Karadzic visited the ex-Bosnian Serb leader in a detention cell Sunday accompanied by the lawyer. Asked later by reporters whether they had filed an appeal, Luka Karadzic said: "Of course we have."

"Radovan is well, totally calm and relaxed," Luka Karadzic said after the visit. On Monday, he was seen taking two suits for his brother in jail.

Karadzic had been a fugitive for nearly 13 years and Serbia had been accused of not searching for those sought by the U.N. tribunal.

"We don't know where the other fugitives are hiding," Cvetkovic said in a reference to Karadzic's colleague, former Bosnian Serb Gen. Ratko Mladic. "If we knew it, we would do as we have with Karadzic."