Hugo Chavez was on a hug-and-make-up visit to Spain on Friday, his first since a now-infamous exchange in which Spain's normally reserved monarch told the voluble Venezuelan leader to "shut up" at a summit in Chile last year. 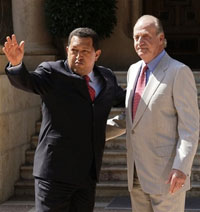 Chavez arrived an hour late for an appointment at the king's summer residence on Mallorca where he was greeted by King Juan Carlos, Foreign Minister Miguel Angel Moratinos - and watched by a mass of photographers and TV crews.

"Why don't we head for the beach?" Chavez joked with the king. The king smiled, shook hands and welcomed Chavez warmly.

After the breakfast meeting at the Marivent Palace, Chavez was to fly to Madrid for talks with Prime Minister Jose Luis Rodriguez Zapatero in the afternoon.

Officially, the trip is being billed as an opportunity to discuss bilateral relations - but the agenda will also undoubtedly include at least some awkward references to last year's high-level diplomatic dustup.

In a television address to his countrymen last week, Chavez said he was ready to let bygones be bygones - but also joked that the king ought to know it is not in his nature to sit quietly.

"I would very much like to give the king a hug," Chavez said in his weekly show of his Spanish visit. "But you know, Juan Carlos, that I am not going to shut up."

The testy exchange with Juan Carlos occurred at a summit in the Chilean capital, Santiago, in November, when the Venezuelan leader repeatedly referred to former Spanish prime minister Jose Maria Aznar as a fascist while seated in a panel next to the king and Zapatero.

After being warned repeatedly by both Juan Carlos and Zapatero to tone down his rhetoric, the king snapped: "Why don't you shut up?"

The exchange quickly made its way into newscasts and onto the Internet - and was even marketed as a mobile phone ring tone in Spain. Chavez demanded an apology, and even said he was freezing diplomatic relations, though he never did.

After the United States, Spain is perhaps the most influential country in Latin America, with billions invested throughout the continent, and the strained relations were also a legitimate diplomatic embarrassment.

Spain had previously been on reasonably good relations with Chavez - a major thorn in Washington's side who has likened President George W. Bush to the devil.

The thaw between Spain and Venezuela began in May, when Zapatero and Chavez met face-to-face for the first time during a summit in Lima, Peru. In June, Spain formally invited Chavez for a visit.

The Venezuelan leader has been making headlines since he kicked off the European leg of his six-nation tour earlier this week.

In Moscow, he said that military cooperation with Russia was proceeding "at full speed," the Interfax news agency reported. The agency also said Chavez had suggested Russia open a military base in his country, but the Venezuelan government said in a statement Wednesday that no such offer was made.