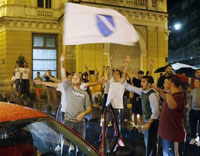 News of the Monday evening arrest of the former Bosnian Serb leader spread throughout the Bosnian capital within minutes - even before it was reported by local media.

Residents poured into the streets singing, chanting, calling everyone they know. Many spilled out of downtown bars in shock - overwhelmed at the news they had been waiting to hear for over a decade.

Ignoring the pouring rain, young men ran down the main street waving Bosnian flags. Some dropped to their knees, slammed their palms against the ground and chanted "This is Bosnia!" - in apparent retort to Karadzic's war time attempts to annex the country to Serbia.

"I still cannot believe it," said Zijah Sehic, 18, leaving one of the raucous crowds to go home and watch more news on TV. "I can't wait to see him in the tribunal in a few days."

In Kozarac, in northern Bosnia, the organizer of a rock concert interrupted the program to announce the news but received only laughter from the audience and thumbs up for a good joke.

Only after enough mobile phones rang and rang and rang did the crowd begin to grasp what had happened, said Zinaida Mahmuljin, who was in the audience. Then the party really started, she said.

In Srebrenica, a mother who lost two sons in the Srebrenica massacre that Karadzic is alleged to have masterminded welled up with emotion as she watched the news on television.

"After 13 years, we finally reached the moment of truth. For the sake of justice, General Mladic should be arrested too, as well as Karadzic," Munira Subasic told AP television. "I think this brings some settlement in our hearts and brings us forward to the future."

Bosnian President Haris Silajdzic welcomed Monday's arrest but noted that Karadzic's legacy of ethnic cleansing had left scars that were still visible today. Over 100,000 Bosnians are dead and hundreds of thousands of those expelled in Karadzic's ethnic cleansing campaign have not returned to their homes.

Still, Silajdzic said the arrest will restore victims' trust in the justice system, a comment echoed by others.

"We have been waiting for 13 years and we lost hope," said Kada Hotic, a survivor of the worst atrocity in Europe after World War II - the Srebrenica massacre. "Now we know - there is justice."

Yet in Bosnia, one group's villain is another group's hero.

Since the end of the war, the country has been divided into a republic run by Bosnia's Christian Orthodox Serbs and a federation between Muslim Bosnians and Catholic Croats.

Overnight reactions from Republika Srpska - a name Karadzic personally gave to the Serb republic - were rare. Officials did not make public comments and the streets were deserted.

Local TV showed a reporter stopping several cab drivers in the northern city of Banja Luka. Most said they had no comment on Karadzic's arrest, but one called it "a tragedy."

Karadzic's wife, Ljiljana, told The Associated Press by phone from her home in Karadzic's former stronghold of Pale that her daughter Sonja had called her before midnight with the news.

"As the phone rang, I knew something was wrong. I'm shocked. Confused. At least now, we know he is alive," Ljiljana Karadzic said, declining further comment.