Tropical Storm Bertha headed back out over open ocean and away from the U.S. mainland after it battered Bermuda, knocking out electricity to thousands on the Atlantic tourist island. 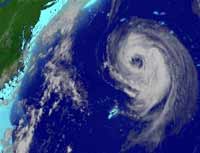 It is the longest-lived July tropical storm in history, according to the U.S. National Hurricane Center. Bertha became the Atlantic season's first hurricane, before weakening into a tropical storm. It is expected to re-strengthen into a hurricane by late Tuesday or early Wednesday, forecasters said.

The previous longest-lived storm, known as Storm No. 2, occurred in 1960 and lasted just over 12 days, according to forecaster Daniel Brown. Bertha is entering its 13th day.

The storm was centered 355 miles (570 kilometers) northeast of Bermuda early Wednesday morning, with sustained winds near 65 mph (100 kph), the center said. It was moving east at 6 mph (9 kph) and was expected to turn toward the southeast later Wednesday. The storm was forecast to strengthen slightly during the next few days.

In Bermuda, the government dispatched cleanup crews and expected to restore power to 200 remaining customers by the end of the day. Bertha's heavy rains flooded roads and its winds felled utility poles, leaving up to 7,500 without electricity on Monday. There were no reports of injuries.

Bertha whipped up dangerous rip currents along the U.S. East Coast from the Carolinas through southern New England, contributing to at least one drowning Saturday along a New Jersey beach, officials said.

The storm was gaining strength with maximum sustained winds near 85 mph (137 kph) early Wednesday. But the storm was expected to weaken as it moves over cooler waters. Elida was centered about 575 miles (925 kilometers) southwest of the southern tip of Baja California, Mexico.

A new tropical depression has formed in the Pacific. Its center was about 560 miles (902 kilometers) southeast of Acapulco, Mexico early Wednesday and it was moving northwest at about 9 mph (14 kph) with maximum sustained winds near 35 mph (56 kph).

The depression was not an immediate threat to land. Forecasters expect it to become a tropical storm later Wednesday.